I'm a feminist theologian and a mom. I don't know what to do about church for my kid. 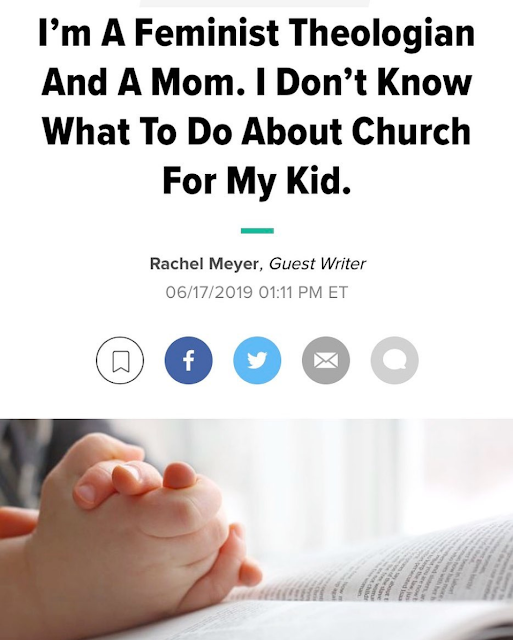 My latest for HuffPost. This one's been on my mind for years. Grateful to finally share it.

I'm a feminist theologian and a mom. I don't know what to do about church for my kid.

"In my early 20s, I dated a man who, when asked whether he believed in God, said: 'I believe in me.' He was a good, kind, smart man; the type who grew herbs on his windowsill and played trombone in a jazz band and coached a kids’ soccer team. Total marriage material. But I knew in that instant it would never work between us.

I am a person of deep faith: a preacher’s kid, a yoga teacher, and a meditation geek with a master’s degree in systematic theology. I’ve spent my whole life belly-deep in the spiritual world. So raising a tiny person of faith shouldn’t be so hard.

I don’t know what to do about church for my kid. Studies show I’m not alone. Youth are fleeing the organized church in droves. Millennials are increasingly raising their children as “nones.” Self-identified atheism has doubled among Generation Z. And mainline Protestant denominations are famously flailing.

Spiritual trauma and toxic theology run rampant. Between the United Methodist Church’s recent upholding of the ban on same-sex marriage and the ordination of LGBTQ ministers, the Catholic Church’s ongoing revelations of pedophilia horror, and the Southern Baptists’ February unveiling of vast child abuse, why would any reasonably progressive parent choose to send their child (alone!) into a church basement?

There’s no question that I want to raise my son with a deep spiritual practice and a reverence for mystery. But where to find a religious upbringing he doesn’t have to unlearn?

I was doing yoga on the kitchen floor one afternoon in 2015, listening to an interview with Buddhist meditation teacher Lodro Rinzler while my toddler son napped. Rinzler talked about growing up Buddhist — being taught he was fundamentally good — and how rare and refreshing it was to not have to “unlearn” the deep psychological wounds of the doctrine of Original Sin (as had so many of his Christian friends).

His words struck me. I haven’t stopped thinking about them since.

Faith formation is no joke. Our early understandings of divinity have the power to shape our psyches, our relationships, our lives."

the diva said…
I'm also a PK abd I empathize with your dilemma. I would like to encourage you to check out the Christian Church (Disciples of Christ). I'm not sure how prevalent they are in Switzerland, but they are a worldwide denomination. The DOC encourages finding your own path to Christ, and is very welcoming to seekers. They have been ordaining women almost from inception, which is early 1800s, and LBGTQ+ persons are also freely ordained now. Bible interpretation via personal discernment is strongly encouraged and respectful discourse of varying theological ideas is common. Frequently the DOC is described with the phrase "No Creed but Christ." I went through a period of questioning & exploration, thinking I needed to break from the church I was raised in to find what I truly believed. In doing so, I found what I wanted from church was right in my denomination all along. I am biased, but I think you might just find what you're looking for there.
June 17, 2019 at 7:49:00 PM PDT

Unknown said…
To follow up on the previous comment - The Disciples of Christ merged with the Congregational Church in America to form the United Church of Christ. A denomination that has everything that you talk about needing. Check it out!
June 18, 2019 at 1:45:00 PM PDT

Rusty & Georgia Henrichsen said…
I am a lifelong member of the Church of Jesus Christ of Latter-day Saints. Most Christians do not consider us mainline because we don't share their traditional view of the Godhead. We do not believe in original sin, in fact we believe that young children are incapable of sin and as such we do not baptize children before the age of 8. We do believe in the commandments, both of the Old Testament and from the teachings of Jesus and therefore we do believe in sin and repentance. I believe if you checked out our church, you would find a loving group of people who are looking to improve their lives as we learn and grow together on our journey through life.

Rach said…
Thanks so much for reading, and for sharing your stories and advice, friends! I am grateful. We're walking this path together. Warmly, Rachel
June 25, 2019 at 5:26:00 AM PDT