Path Of A Teacher: My Story 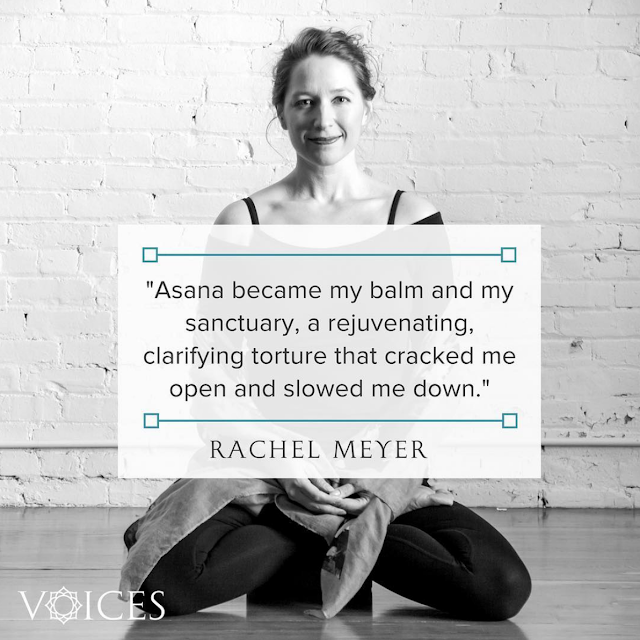 Down Under School of Yoga asked me to write a little about how I came to be a teacher. Here’s my story. Read on for more than you ever wanted to know about my tiny life.


Thanks to the warm folks at Down Under for the nostalgic prompt. The paths our lives take are wise and wonderful and often wholly unexpected. Grateful for the reminder.

Path of a Teacher:
My Story


Most of us don’t come to the mat because life is peachy. We’re drawn to yoga because of an ache in our hearts or our bones, or a mind that won’t quite stop racing.

(As Pema Chodron says: Everything else is just the weather.)

It was suffering that brought me to the mat and kept me there, too.

I was 23, living in Malaga, Spain when I got the call. My father had been diagnosed with Stage 3 esophageal cancer. He was only 55. He’d always been healthy, embodied, at ease in his bones. The last person you’d expect to get sick.

I flew back to Nebraska to be with my family as he underwent surgery, chemo, and radiation.
Growing up on the Great Plains, the daughter of a Lutheran pastor father and a music teacher mother, two things were lovingly constant in our world: church and the arts.

And life was good.

But I was a classic Type-A overachiever: a perfectionist, good at everything I did, star of the musical, valedictorian, yada yada. In spite of that external success, though, I don’t remember much of my teenage years.

I was starving and sleeping two hours a night. A textbook anorexic.

It was a kind college therapist who first introduced me to yoga. She handed me a photocopy of Christy Turlington doing Kukkutasana on the cover of Time Magazine.

(This was 2001, back when people still read print magazines.)

I thanked her and thought to myself: Oh, HELL no.

Yoga and meditation were something other people did. Old, boring, middle-aged women-type people wearing drapey outfits and listening to hippie flute music. Not my scene.

I wanted dance and music and a driving beat and sweeping, vital joy.

Musical theater had always been my heartbeat and my lifeboat. My dearest relationships and greatest joys came from singing and dancing. I moved to Scotland after college and stumbled across starring in a show.

That’s where, on the floor of my mouse-infested 1800s Edinburgh flat, I really discovered yoga. Those ten minutes of quiet morning stretching became my favorite part of the day; a measure of stillness before moving into the world.

Later that year, standing at a payphone on a beach in Malaga, I got the shocking news from Nebraska.

After nine months of treatment, my father was declared “cancer-free.”

Relieved, I moved to San Francisco, determined to be a professor of Marxist feminist theology. Groundbreaking ecofeminist theologian Rosemary Radford Ruether was teaching in Berkeley for two short years, and I was eager to follow her there.

I’d been running the City’s hills, shin splints screaming and hamstrings tightening by the day. There was a studio just down the street, and one evening my roommate dragged me to class with her.

The teacher led us confidently through the 26 poses, and there, in that sweltering, airless 105F degree room, I felt refreshingly at home.

What a revelation! Here, I was allowed to be quiet; here, I was required to be quiet. I could roll in wearing ratty old sweats and stand in the back corner and disappear into the breath, the silence, sweating and twisting and stretching out everything in me that was frantic or frazzled or stagnant or uncertain, balancing precariously on that sweat-soaked carpet.

Asana became my balm and my sanctuary, a rejuvenating, clarifying torture that cracked me open and slowed me down.

The practice pushed me to no end. It was so hard to stay alive! So hard to keep breathing! So hard to not freak out or swear at the teacher or throw my arms up in frustration and stomp out of the room! So hard to fall out of the pose and just get back in, no drama, no self-judgment.

Get lost. Start over.

This is yoga. This is meditation. This is parenting. This is intimacy. This is art.

One semester into graduate school, my father died.

Losing him was shattering.

Death had moved into my bones. It breathed itself into my cellular memory, made a permanent home amongst the scars and the wrinkles and the roughening skin. I now knew death was inevitable; both my father’s, and mine. That deep knowing was at once a great liberation and a sobering admonition.

During this time I'd stumbled upon Buddhism, Hinduism, and, in particular, yoga philosophy. Studying Christianity had ironically made me more Buddhist. Its emphasis on the universality of suffering was my greatest solace in those bleak weeks. Buddhism was the only thing that felt honest.

Dad’s death made heartbreakingly clear that life is short, our bodies are impermanent, and we don’t know how long we get in them, so we’d better do our best to wake up and really “be here” while we’re here.

Studying theology was fascinating and I was grateful to devote the ensuing years to it. But, over time, I realized I didn’t want to spend my life in a library on a hill, scribbling obscure journal articles about radical theology but not doing much real-world work beyond the dusty shelves.


I wanted to write about the sacred, about what it means to live well, about body-positive soul-work, in words that regular people could relate to; words they might see on the newsstand while waiting in line at the grocery store.

Yoga philosophy was the eclectic blend of psychology, bodywork, and moving meditation that felt true. I could see reflections of all the world religions in its ethical teachings. There was a oneness underlying diverse traditions that gave me hope.

On recommendation from a colleague, I made my way rather accidentally into Rusty Wells’s Bhakti Flow teacher training.

The vinyasa was a rare melding of all the best things in my life: music and spirit, theology and athleticism, song and prayer, breath and service, laughter and community, rhythm and dance. It was everything I'd loved about musical theater and theology and body positivity, all bound up in one moving meditation.

I couldn’t quite believe that after so many years of reading heady French cultural theory about embodiment, here was a vibrant practice that made the sweat and the breath and the song so much more real — literally embodied — followed by a Corpse Pose at the end of class to remind us, daily, via this little death practice, that we don’t get this body forever.

Everything about it felt like home. Everything in my life had been pointing to this practice.

I'd found my people, my dharma, my way.

The vinyasa was transformative, and I wanted to help other people feel a measure of that grace; to share the ways in which the yoga had calmed my mind, stretched and strengthened my body, taught me to really be in my life, and cracked my heart open to see the God all around me.

So I started teaching.

I look back and see what a turning point his suffering, and our heartache, wrought.

Yoga is now my life. The practice guided me through the grief of losing him, it nurtured my private passion into a thriving career, it introduced me to my husband, it coached me through giving birth and becoming a parent myself, and continues to save me daily from blowing it as an impatient, imperfect mother and partner.

And it will guide me through to my own last breath.