So About That Trip To Nebraska 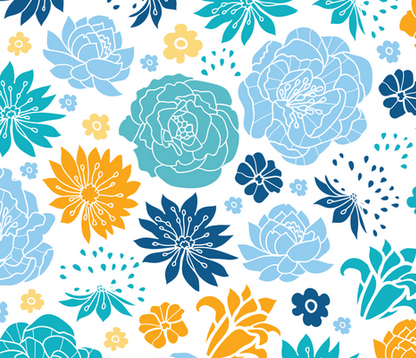 We're home now, as of late Tuesday night, getting back into the regular rhythm after two weeks away.

And, you know what?

We had a wonderful time.

The trip back for my high school reunion came in the wake of a weekend in New Jersey for a meaningful family memorial service. During that already-somber time together in my husband's childhood hometown, news of Buddhist teacher Michael Stone's mysterious hospitalization (brain-dead, and in a coma) also came to light, the evening before the service. And then, of course, he passed away Sunday evening, shortly after we'd driven home following a beautiful, and emotional, weekend.

So I boarded a plane to the heartland a few days later feeling quiet and reflective and grounded somehow in the brevity and fragility of life.

The reunion itself felt like a snapshot of the collective experience at 38. Lots of wine (well, for me at least), and lots of conversations about divorce, infertility, miscarriage, aging parents.

Totally different from what it would've been had our class held a ten-year reunion (which we didn't), at which point surely everyone would've been getting married and popping out kids. (Except for me, who would've been shaking martinis and avoiding writing a thesis in San Francisco at the time.)

You know, I was surprised, and a little bit saddened, by how many folks have gotten divorced, and quietly so, in a certain kind of stealth mode. We as a culture tend to fawn over babies and fixate on weddings, but there's not really a social script or a ritual for the equally-common, equally-normal transition that is the dissolution of a relationship.

It all just made me think, again, always, about impermanence.

The incontrovertible fact that all things arise, suffer change, fade away.

Our bodies, our relationships, our lives.

Some more quickly than others.

But all, eventually, always.

I was pleasantly surprised by Lincoln itself. Hadn't been back for three years, and even then I had a four-month-old not-sleeping always-nursing baby so I was half-conscious in that tortured sleep-deprived haze most of us know too well.

It was spacious and bright and clean. So much sky. Wide boulevards. No traffic. An invigorated Haymarket. A stellar children's museum. A dreamy outdoor amphitheater with a pretty-damn-good production of "The Little Mermaid."

With massive Trump signs screaming alongside the highway.

You know, though? In spite of the aging and the changing and the breaking, there was so much joy.

In watching my kid totally adore playing cars and watering plants with his grandmother. In squeezing in a quick evening with beloved cousins who have the same Meyer nose. And in reconnecting with my dear old music and theater and dance friends. Amazing how 20 years can pass but peoples' energy remains just exactly the same. Amazing and heartening and hopeful. 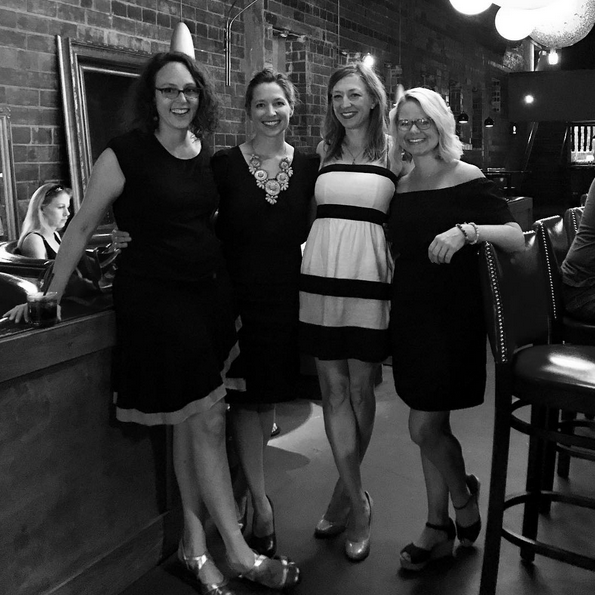 As full-to-overflowing as my heart was, though, in my mind, as I sailed back up I-80 to the Omaha airport with a sleeping bubs in the back seat of my rental car, I was struck by the underlying theme of it all, hovering there just below the surface.

And resilient, open-hearted joy, in the face of suffering.

There was a friendly, talkative lady on the plane next to me back to Boston. Usually I look forward to plane rides as a blessed opportunity to shut the hell up and hunker down and get lost in my reading. In this case, I'd hardly seen the news all weekend, so I was excited to dig into my Twitter feed and catch up on everything I'd missed whilst gallivanting around the Omaha Zoo and Morrill Hall and Pinewood Bowl.

But then, as the plane began to push back from the gate, my sweet preschooler turned to me and said, loudly, through his headphones: "Mama, are we there yet?"

And this nice lady next to me laughed out loud, and said "Don't I wish!" and we began to chat.

She and I skated around talk of the current administration tentatively enough to discover that we were roughly on the same page, and we quickly lost two hours to talk of politics and religion and Jesus and healthcare and immigration and all those other topics you're not supposed to broach with complete strangers.

She told me about her bipolar mother and the 30-something alcoholic nephew with the heart defect she was going to visit. The one who was lucky to be alive. And, yet, who couldn't stop drinking.

She was reading a book about suffering, a progressive Christian perspective on suffering, and so we dove into questions of God and meaning, Jesus as radical social justice activist, and the obligation to live out of love, first and foremost, above all else.

We talked about the overlaps between Christianity and Buddhism and yogic philosophy, the centrality of compassion to all of those worldviews, the fact that you've gotta live as though there's something bigger than yourself, and my own ongoing question of how to raise my son spiritually amidst contrasting theological worlds. 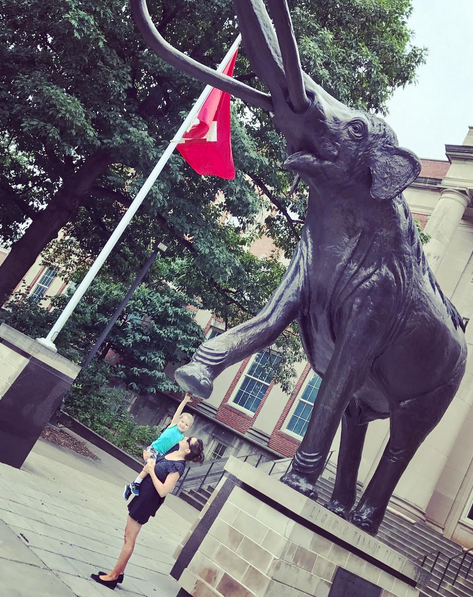 Every time I go back to Lincoln, particularly driving down 84th Street, I am struck by the number of massive churches there. And I wonder how on earth there can be enough parishioners to support so many massive churches. And yet, they come.

My son and I went to the 8:30am service at my mother's Lutheran church Sunday morning (only a little bit hungover from the reunion the night before, ahem). Walked in at 8:29 or so, and the place was packed. Two more full services followed that one.

People in Nebraska go to church! I guess my perspective is skewed after 15 years on the (godless heathen brunch-going) coasts. But people there really go to church. And you can feel that. In lots of big and small ways.

We flew back to Boston on Tuesday afternoon. Duke and I sat in the Omaha airport cafe, and after a big weekend of so many adventures, we exhaled.

Being disconnected from the news for a few days wasn't a bad thing, though I felt strangely out of touch with reality. DT's Twitter announcement about the #transban Wednesday morning brought me right back into the political maelstrom, and Scaramucci's keeping me there, along with the healthcare vote last night.

For a few moments though over the weekend, thanks to slow wifi and a busy social schedule, all that seemed to matter was lifting a glass with my dear old friends there on the hot, muggy prairie, many of whom were just as I'd remembered them.

Sometimes it's good to be reminded where you come from. And refreshingly nostalgic (and awesome) to let your 5th-grade friends buy you a drink.

Kevin said…
Great seeing you, Rachel. Thanks for putting into words a summation of our reunion and the place we grew up. Some of us moved away but it's always great to come back for a visit. I was delighted to talk to so many people. And surprised that so many still live in Lincoln and Omaha. My friends wanted to know what was in the water that kept us looking so young at almost 40. I think it might not have been the water but instead Nebraska.
July 29, 2017 at 1:35:00 PM PDT