On not teaching for a month 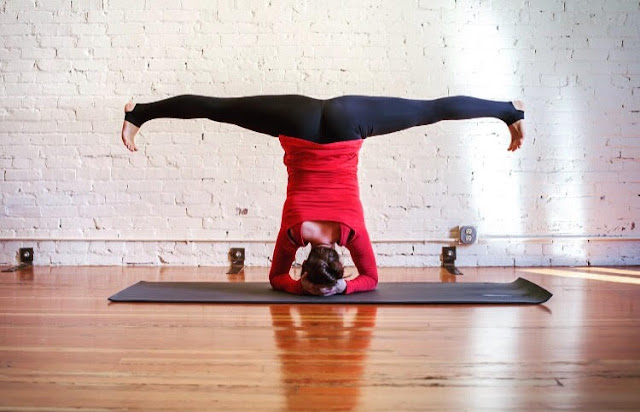 It's been almost six weeks since I've taught a yoga class. Longest break I've taken since the three months I stepped away to birth a human.

Feels kind of strange, and ok. It's good to take some time off. A sabbatical of sorts.

1. Sometimes it's nice to just shut up and listen.

There's so much chatter in the yoga world. Lots of woo-woo, sure, but also just lots of word salad. If I had a dollar for every newsletter or Instagram post I've ever read that left me shaking my head and asking WTF that yogi just said, I'd be a rich lady. There's a lotta whack shit out there. And sometimes we all benefit from just shutting the hell up and listening.

Also: we flew cross-country five times in March, which meant I got the chance to read five amazing books. Again, it felt quiet and nourishing to not be the one spewing content. To just sit back and listen to someone else's voice (be that Ruth Bader Ginsburg or Nadia Bolz Weber or Paul Kalanithi) and just get over myself.


2. Recalibrate. Get clear. What am I teaching, and why?

Not teaching, I feel more able to be real. Political, thoughtful, quiet, serious. There is an element of teaching yoga that is performative, super-extroverted, that is very much like being onstage in musical theater or holding court behind a bar. And it often requires us to be chirpy, perky, pastoral leaders. And it's one element that I'm increasingly disinterested in.

Not teaching, I feel less pressure to be perky, allowed to be more of a writer and less of a cheerleader. I never wanted to be an aerobics instructor, and in spite of its roots in meditation, there's something about teaching yoga that's uncomfortably parallel to that shit.

But to me, a yoga teacher is more a moving meditation teacher than anything else. So how can I share the practice I love without having to be a motivational speaker with a job-requirement tight ass? How can I be more authentic in my personal, online, and teaching presence? That's the question.


There are plenty of benefits to the social aspects of practicing at a studio, and my life is a testament to that. (Hello, I met my husband in a yoga studio! And most of my best friends are long-time yoga peeps.)

But my practice right now is meditative and quiet and simple. It's fast and butt-kicking and athletic, for sure, but it's not flashy. Not even public. It feels like the ultimate portable meditation device (I think credit goes to Sharon Salzberg for that line).

It goes anywhere I go. And it was a foundation in the midst of a month of living in hotels, out of suitcases, practicing on unfamiliar floors in strangely-lit rooms that were not mine. I love yoga's minimalist, almost monastic simplicity: just calling for your breath, your bare feet, comfortable old clothes you can move in, and a hotel room towel on the floor.


4. Definitely drink more when I don't have to be up at 6am to teach 8am classes.

"Oh, hey again, beer! Welcome to the New England cider tour. Haven't met a Sauvignon Blanc I didn't like lately. But why does my head hurt so much today?"


5. Living on beer and fries doesn't increase your prana.

We've had our own kitchen (and our own pots and pans) now again for about two weeks, and after a month of beer and fries, it feels like heaven. Just being able to make lentils and greens for lunch again has been huge. Greens are good. Greens are great. Let's get more of those on restaurant menus, please. Sidenote: Thai and Indian restaurants are especially great for cobbling together a delicious vegan(ish) dinner on the road.

That said, you can get by on 2 or 3 practices a week and still feel ok. The asana opportunities ebb and flow. The asana comes when it comes. And you survive when it doesn't.


6. Yogis can be (inadvertently) annoying. Hush up, already.

If you're going to be living above someone, start practicing your bandhas, because jumping to the top of your mat means you'd better float, bitch, or they're gonna hear a big "thud" every time you land.

(Luckily, we bought a first-floor flat, so I can continue to be a lazy yogi. Hooray for a beautiful tiny urban home, across from a park, coming at the end of May. We are delighted.)

Sometimes other things are more important. And the arm balances will come and go.

Starting over with finding/choosing a studio means I can really feel out what's the best fit. That's important. That's everything. Trying to teach the wrong style of yoga at the wrong kind of studio can be soul-sucking. So let the yoga studio speed-dating begin.