How Bernie Sanders Taught Me Yoga 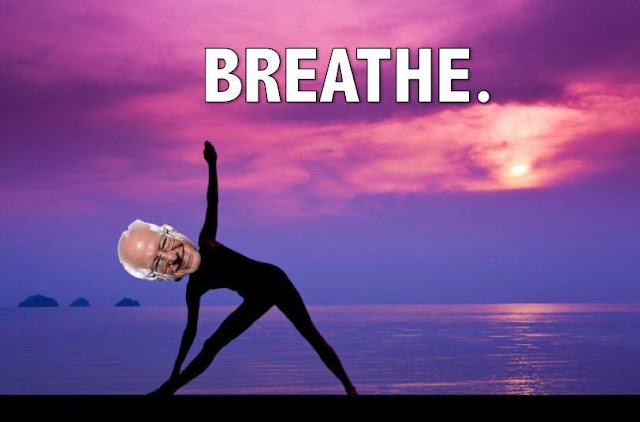 I wrote this little riff on why Bernie Sanders is my favorite yoga teacher late Thursday night. Delighted to have it published on Yoga Dork today.

Please give it a read. This one's been stewing around in my head and my heart for awhile now and I am so glad to have it out in the world ahead of Tuesday's big primaries.

How Bernie Sanders Taught Me Yoga

Ted Cruz is hollering at Donald Trump to “breathe, Donald; breathe.” Marco Rubio’s jabbing him about doing yoga onstage at debates. And both are selling yoga products on their campaign websites.

Since watching that Republican debate, I can’t tell my students to breathe without feeling uncomfortable, like Ted Cruz in leggings and a ponytail.

Some of my colleagues are ignoring the election completely. They think politics is crass, negative, not spiritually relevant. They’d rather be in the studio meditating or chanting loving prayers toward all the candidates. That’s super nice, too, and I’m totally on board with sending some peace and ease to all of those folks, even the ones who make my blood boil, because damn, this election season is a bitch.

I rush home after teaching to catch the tail-end of the debates. I spend Saturday nights in front of the TV cringe-watching Donald Trump’s bizarro meandering victory speeches. I troll Twitter in the wee hours of the morning for the latest analysis on who’s projected to win Ohio and Florida.

I haven’t felt this politically invested in years.

I am a progressive Democrat. I am also a lifelong feminist and will support Hillary Clinton tooth-and-nail, should she end up as the Democratic nominee. At first I figured she’d be my candidate all the way. I mean, go first woman President! and all. And who’s more qualified, right?

But, very quickly, very easily, Bernie won me over. His authenticity, his passion, his commitment to economic justice? Well, geez: he’s a total yogi.


Read the rest over at Yoga Dork.

(And a big thanks to YD for having the guts to go political! Yoga is politics. Politics is yoga. End of story.)