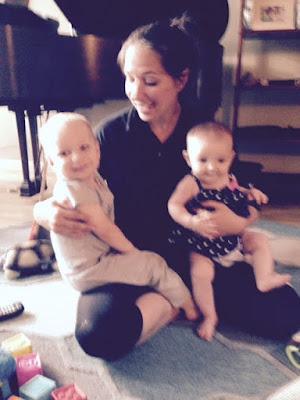 We just flew back from a sweet family gathering in Washington, DC. Got home late Monday night.

(Pre-emptive apologies to all the rad college friends I didn't get to see even though we were just hours away from one another for a few rare days. It was a wild 'n woolly family-filled weekend. Of the best kind. Including family pictures. Which I generally resist and which as a parent I have totally failed to properly take as of yet. Until now. So, in spite of the humidity, and how weird it felt to put on non-leggings for a few minutes, it was worth it, since my cute kid has now been enshrined in his bald little sweater-vested glory for all eternity.)

The dry air here in California feels so good. Cool. No humidity. I spent four years living just up the coast from DC in Delaware. I remember the muggy, malarial Mid-Atlantic summers. But I am no longer strong enough to push through them. Northern California has made me a weenie.

It is so nice to be back home. For a week or so.

Our new Portland house is officially ours, as of last week, all papers having been signed and all bank accounts having been pillaged. This makes everything feel real. I have just three classes left to teach. Most everything is packed, including the bed frames, including the frying pans, including the nice towels and sheets. Robb drove one of our cars up already this week. I'm sitting on the bedroom floor tapping on my laptop with one eye on my sleeping kid and a yoga mat under my feet. It feels minimalist and monastic and awesomely spare.

Moving Day will be here before we know it.

The East Coast flights went fairly well, considering they were 5-hour trips with a time bomb of an energetic toddler on our laps. Little man slept for a good 3-hour chunk of the first flight. (Bless him.) Virgin wins big for in-seat screens and hip lighting and the excellent fact of being headquartered in Terminal 2 at SFO. We got lucky and scored an empty back row on the way home Monday night, so Duke got to ramble and scramble and crawl and push buttons and lift the tray up and down and up and down and do all of those things that inquisitive 17-month-olds like to do. We were vastly relieved to get wheels down at SFO and to have survived two long flights without having to resort to administering Benadryl, which is what other parents in the know seem to recommend for such long stretches. Nothing wrong with drugging your kid to survive a few hours in close quarters, um, right? Um.

Tuesday morning we slept til 6:15 (jet lag be damned!) and were super stoked to have the babe totally not be affected by the 3-hour time difference. I was in the kitchen making coffee when I looked over at the sink and, to my surprise, saw a middling brown spider under Duke's plastic blue sippy cup.

Surprised because, well, I'd trapped that damn thing under said sippy cup a full week before.

I've got a thing with spiders lately, see. We have a lot of them (something about the drought and the heat, says my friend Cassie). But I can't just squish them anymore. Ahimsa, you know. Non-suffering. 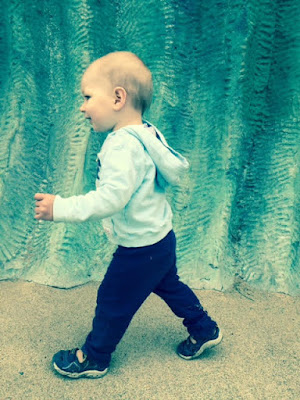 There's this Buddhist teaching that at some point in time every living being was once your mother. So that spider was once my mama. That cicada once held you close to her breast. (Do cicadas have breasts?) That chicken once tucked you under her feathers. That geeky dude with the bad goatee who sits in the cubicle one over slurping his ramen once cuddled you close at night.

Once you start to see the world as full of sentient beings who were once your loving, tender, compassionate mother, it's really hard to squish them. To kill them. To smush them. To suck them up with a vacuum while they skitter up the wall and over the window frame (not that I would know anything about that very particular example involving a very particularly LARGE and certainly-poisonous spider).

Whether it's a beloved lion or the pig that some people call lunch — they were both once your mother. So how can you ever even consider killing them?!?

Back to the spider on my kitchen counter. It had turned up a week or so ago while I was in the kitchen making lunch for Duke. I couldn't kill it. I couldn't manage to shoo it out the window. But I also couldn't just leave it there knowing full well it might scurry into one of our coffee cups or the coconut oil or a Tupperware full of French lentils.

So I did what any well-intentioned weenie does and grabbed the closest cup and hastily plopped it on top of it. Spidey-Mama was fine, still breathing, and no longer a threat to me and mine. He walked around in his new terrarium, checking out the walls, climbing them, crossing to the other side, climbing the other, trying to find a way out.

I felt like it was the least-offensive way to resolve the situation. He'd eventually starve to death or suffocate, right? (Ok, maybe not so inoffensive, then.) But at least then I wouldn't have to squish him.

Fast-forward to Tuesday morning. 6:30am, making coffee, happy to be home in our child-proofed kitchen. I look up. And there's that poor Spidey-Mama, still making the rounds, still climbing the walls, searching for a way out, liberation taunting him from just outside the blue plastic walls.

He'd spent the last week searching, thinking he could get out, thinking there was hope, if he could just find the right window, the right crawlspace. He didn't realize that his time was limited, that eventually he'd run out of air, fuel, wouldn't be able to continue.

It was striking. I saw that little guy fighting, searching, seeking, not giving up. And it left me inspired and depressed all at once. I thought: is this what Samsara looks like? That endless cycle of suffering and rebirth? That fruitless search for ease, freedom from suffering, liberation, fresh air?

Are we all just doomed spiders searching hopelessly for the way out of our suffocating blue terrariums?

Monday night, about halfway through the flight, I puked. I knew it was coming in that weird quiet creeping way you always know a puke is coming. Whether or not it had to do with the fact that I was watching Kim Kardashian on I Am Cait is another question. But I knew it was coming. 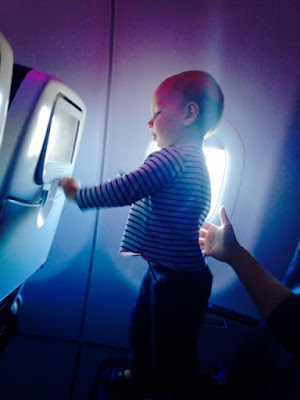 Duke was passed out on my chest, having exhausted all the scrambling and the buttons and the climbing. I made urgent eye contact with Robb, held the crinkly puke bag up to my mouth, and managed to transfer Duke just in time to empty the contents of my belly into the vomit sack.

There was a lot of chocolate.

Thanks to the fact that we were in the back corner of the plane, I don't think anyone heard me. I grabbed my purse, pulled out the Ziploc bag of baby wipes that I always carry with me, and quietly wiped off my mouth and blew my nose. I rang the bell and passed the bag to the (unfortunate) flight attendant and that was that. Felt much better.

Duke slept through the whole thing.

Not sure if it was the airport food we ate at DCA or the claustrophobic lack of air in the back of the plane or the large quantities of chocolate I ate to numb the anxiety of flying with a toddler. It came and went and was over with, and we were all fine.

But then in the car on the way home, Duke looked uncomfortable. His face turned red and he started smacking his lips. He started pointing toward his belly. I had a foreboding sense that something wasn't going to go well.

Sure enough, just before we hit San Rafael, little buddy puked. Out came the milk. The strawberries. The peas. All of it.

I wiped him off, snuggled him close, as one can best snuggle a kid strapped in a shitty-ass carseat. He clasped my fingers, relieved, two in each hand, and nodded off, heavy eyelashes drooping. I thought that was the worst of it.

We hustled home, eager to get the little guy out of his wet clothes, leaving the luggage in the car. I carried him into his room, laid him gently on the changing table, and he looked up at me, fear in his eyes, smacking his lips, and yakked again, three times. I made it to the sink for the last round.

But minutes after the whole episode had come and gone, Duke perked up. He was his vibrant, jolly little self, thrilled to be home, running around the house in his jammies, bouncing happily on the bed, dragging books over to read together. It was such a relief.

We changed our clothes, fell into bed and watched him closely that night, making sure he didn't yak anymore. He was fine. We were all fine, and woke up healthy and happy and hungry.

I am always struck by the lightness most of us feel after we puke. The clarity and quietude, the emptiness, all of which are really, well, kind of nice. I felt it in myself and I certainly saw it in Duke.

The moments of suffering had passed. In the midst of them, there in the back of the airplane waiting for the vomit to come, knowing it was coming, they'd been forboding. Then again in the backseat of the car, headed home, watching Duke puke and not being able to pull him close to my chest to comfort him, the moments stretched, long and awful.

But they passed. And we were fine, and light, and maybe somehow strangely a little better for the clearing-out of whatever poison had momentarily made its home inside us.

And the Spidey-Mama is still circling the plastic blue sippy cup, trying to find his way out, searching, optimistic, that maybe, maybe if he just finds that one right little exit, he'll be able to escape, and start fresh, and head outside, brand new. 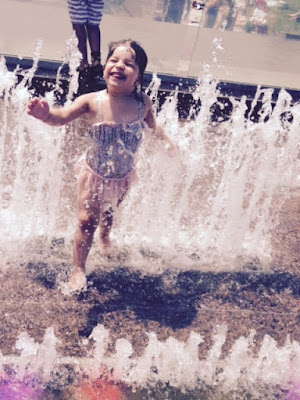 Maybe we are all stuck in our own little airless terrariums, with just enough light and air and view to think we've got hope. Maybe the view is enough to keep us from getting mired in the fact that we are all, yes, all of us, due to suffer and age and wither and die. I am grateful for the moments of lightness and clarity that come after the suffering, just enough to keep us going, to help us turn the corner, to remind us of the gift of simple things, like a settled stomach and a bouncy kid and the ability to fly thousands of miles above the earth in the midst of clouds and sky, traveling the length of a continent in a single afternoon.

And the unabashed joy of an urban splash park on a sultry summer day in DC, with your fearless 3- and 5-year-old nieces, who'll soon be your neighbors in Portland.

We have just a few afternoons left here. I got cranky today, in the August heat and the boredom of having already gone to the library and walked to the park and played outside and done all the usual toddler energy-burning kinds of things you do. I forgot. I took it for granted. The afternoon passed. I wished for bedtime to be here so I'd have some quiet and space to tidy the house and do yoga and catch up on work.

The days pass too quickly. 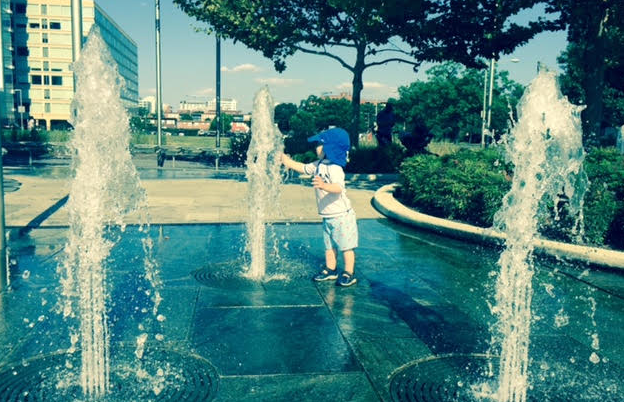