We Are All Wrecks Together 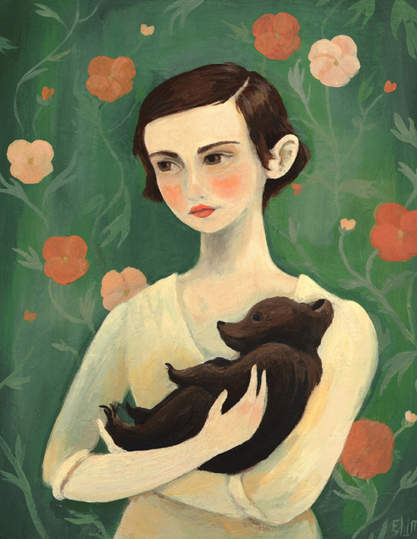 We are all wrecks together.

This is great news, right?

Because it means that we are so close to each other, we really know each other well; we are deeply, poignantly connected. It's almost heartbreaking how connected we all are as human beings. More than we can ever imagine....

All the suffering in the world is not a mistake. It's not your fault, and it's not my fault, and it's not anybody's fault. It's not our parents' fault, it's not our ancestors' fault. It's what connects us to each other. It's what binds us to one another. If only we could have the courage to allow ourselves to feel the suffering and the loss fully, we would appreciate it for what it is: the nature of the world. Not a mistake.

The nature of how things actually are, that they're here at all, means that later they won't be.

That's the love. And that's the miracle.

His teething mouth is clamped onto the Ergo strap.

I am so tired. He is so tired.

He's been up every hour the last two nights.

Out of the blue, after settling into a nice pattern of sleeping for 6-7 hour chunks, followed by a quick 3am feeding, then cuddling in the big bed til 7am. It had become a lovely routine.

We took it for granted.

He hates to nap. He needs to nap.

I need for him to nap. Desperately.

Those naps save me.

Just an hour of feeling like an intelligent adult human again, those naptimes afford. Not playing with stuffed monkeys or narrating my day ("Ok, now we're going to take the spoons out of the dishwasher and put them in the drawer") to ensure his verbal capacity a few years from now. Just being quiet with myself. Craving solitude, independence, asana, wondering if I'll ever read a book or write an article again. Wondering how I ever took all that solo pre-motherhood free time for granted. Resentful that my younger self wasn't more aware of what a precious commodity those unbounded still moments were. Dismayed at the nothingness I'm getting accomplished of late.

("Nothingness," other than raising a human and singing to him and reading to him and making sure he doesn't suffocate or get his foot stuck in the crib slats and keeping him fed and clothed and being single-handedly exclusively mammarily responsible for putting rich fat rolls on his wrists and his ankles and his hamhock thighs.)

I want to take my husband out to soak in hot springs to celebrate his birthday. He's been working nonstop for months with zero time for asana or even a walk or even lunch. There are no spas that accept children. We can't really get a babysitter; doesn't make sense, too expensive; my boobs would need to be pumped if we did that, and Robb wants to be with him, anyway.

So we'll soak in our own dirty bathtub with the little squirty toys and the two half-empty bottles of baby shampoo and the crusty washcloths and save it for another year.

Here on my chest.

Squishy lips open, no longer clamping the Ergo, head precariously tipped to one side.

His eyebrows glint blonde in the sun.

In every instant, his hair changes color. It's a game-show of guessing what it'll end up. In some lights, mouse-brown like mine as a kid. In others, towhead blonde, like Robb's was. In others, undeniably red.

Only time will tell.


I get stuck in the monotonous moments and miss my old life in the City, desperately. Autonomy and urbanity and intellect and speed and hard liquor and stylish hats and no dirty diapers.

But then there he is snorting as you look down at his floppy sleepy head and you think to yourself that you'll probably need to get the snot-sucker out when he wakes up and there are World Cup soccer matches to look forward to tomorrow and Sunday and the fog is finally burning off over Tomales Bay and he looks so damn cute in that striped blue-and-coral-and-white shirt (gorgeous in blue, just like his daddy) that you almost forget about the sleeplessness and the stuckness and the pink ghetto housewife's life you've been living of late (even though Robb does all the laundry and the cleaning and the yardwork and the cooking, which leaves you doing what again, exactly?) and how it is totally opposite of the busy active masculine hustling working writing traveling life you've always lived and how all those articles still haven't gotten written because by the time he actually drifts off to sleep and you precariously settle him down and you hurriedly check your email and remind yourself to respond to those 37 high-priority ones from two months ago and pee quickly and brush your teeth and unload the dishwasher and sit down to finish that half-written blog

he is up again

and Christ-almighty, he was asleep!

and now he's up

and how did that go so quickly?

and when will the thank-you notes get written if he's always in your arms?

but he won't always want to be in your arms, not much longer, really, he's already so wiggly and curious, you know, and this is the most precious time of his life and you get to witness it, right here, in the VIP club seats, staring down at this most-perfect little bodhisattva, this short guru who's already kicked your butt into knowingness and egolessness and detachment from all that was and will be,

and some day he won't want anything to do with you, he'll ask you ashamedly to drop him off two blocks down the street so his classmates don't see him getting out the car with his nerdy mom, and he'll ignore your calls and be too busy out there to

and his eyelashes-for-days fluttering innocently against his cheeks

owning the world in that post-roll moment of triumph


So you chill the fuck out and take a deep breath and look out the window at your beautiful hard-working husband weed-whacking on his day off which was supposed to be a birthday celebration spent soaking in decadent lush rich-people spas in Sonoma and which instead he will spend making you tea in the morning and getting you a gluten-free muffin downtown and whacking those damn weeds and hiking up Perth and giving the bubs a bath together at 6:30 and falling into bed after shoveling in a quick lukewarm dinner standing over the countertop and wondering if he'll wake up in an hour or maybe be kind and give you two before the bouncing-to-sleep on the blue exercise ball commences for the night

and you think of the friends whose babies were "fabulous sleepers" who slept 12 hours a night and took 3 long naps a day and you wonder what the fuck!?? and look down again at little blondie below (yes, I really do think he'll be blonde) and you sigh

with such great love


He looks so much like my dad around the mouth. We found this pic of my father as a baby, taken in 1946 or maybe early 1947, and put it side-by-side with Duke's, and they have the same smile.

Dad, who's been dead 9 years now, who never got to meet his first grandson.

Duke, whose Larry-smile will, god-willing, live on long after his father and I are gone.

If that ain't a helluva gorgeous reminder of all that is fucking sacred in the world, I don't know what is. 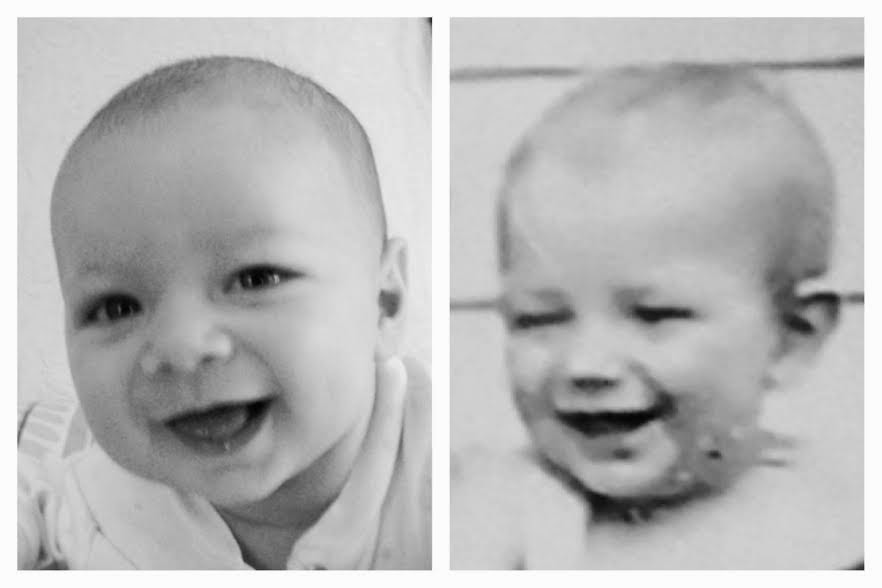 The nature of how things actually are, that they're here at all, means that later they won't be.

That's the love. And that's the miracle.