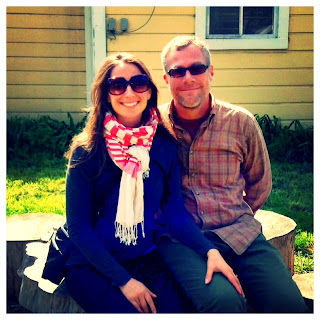 We make a fire, most mornings.

Things heat up inside while the sun comes up and the coastal fog burns off outside.  I brew some coffee, catch up on emails, he dives into work, sweeps the floor, goes out for a latte.  An hour later, the living room's piping hot, and I practice.

We make a fire, most evenings.

It gets hot quickly, especially if you put two or three logs on right away.  You make sure all the windows are sealed and the stove door's slightly ajar to get the flames cranking.  You throw on ratty long pants and a washed-out long-sleeved shirt over your yoga tank to kick the heat up a notch.

He picks up the Phalaenopsis orchid, softly, carefully, gently, and transports it to the bedroom, next to the window, in the weak dusky light, so it doesn't overheat.

When my practice is over and the windows are flung open and the breeze blows through, cooling things down, he just as softly, carefully, gently, picks up the orchid, brings it back into the kitchen, and sets it tenderly on the counter, turning it just so.

It took me awhile to figure this out.  Prior to that, I'd just kind of vaguely noticed that he, very quietly, moved the orchids around a lot.  I didn't really consider why.

The other night, I hit the mat.  The living room was sweltering, really hot, the logs having been cranking for a few hours.  I like it scorching.  Bikram-style, you know, minus all the sexual harassment.

Somewhere mid-Surya Namaskara B, I felt a teasing blast of cool air counteracting the heat coming from the stove.  It didn't make sense.  The evening was cool, for sure, a classic damp West Marin night, but the room had long been a toasty, crackling haven.

I stepped irritably out of Warrior 1 and marched over into the kitchen.  The window over the sink was flung wide open.  Not as in, "Oh, I forgot to close the window," but as in, deliberately, hugely, wide friggin' open.

What the hell, I thought.  How annoying.

And I went to slam it shut so I could hustle back to my mat before losing too much heat.

The yawning window wasn't an oversight, an accident, an afterthought.  It was ajar on purpose.  He'd slung it open, wide, deliberately so, such that the elegant, towering, delicate white flower sitting next to it on the windowsill wouldn't overheat.

He didn't want to cook the orchid.

That's the kind of man he is.

You don't need a spreadsheet or a carefully-crafted online profile to figure people out.  You can tell pretty much everything you need to know by the way they treat the weakest of the weak: children, the elderly, and yes — high-maintenance hothouse flowers.