You know it's Christmas-Hanukkah-Kwanzaa-Solstice time when folks frequently start asking about how to practice when they're away from home.  The holidays are just around the corner (well, actually, some are already here), and depending what you celebrate and where you're headed, you might be staring down an impending inadvertent asana break due to circumstances beyond your control.

(If I had a dollar for every student last week who asked me about the best videos and podcasts to use while they're traveling over the holidays, well, let's just say I could buy a helluva lot of coconut water.)

This absence-of-yoga thing has especially unfortunate timing, of course, given that most of us need some calming and centering more than ever in those moments of our lives that mean visiting family, hauling cross-country, and/or being stuck inside with cabin fever when the temperatures drop.

Modern technology to the rescue.

Have you met YogaGlo?  If not, get there immediately.

I've heard so much about this site over the last few years, not only from friends who've gotten hooked on it, but also from a few really highly-respected colleagues who provide some of the online video content.  I've long had the luxury of living in a part of the country that's saturated with studios, so I never even thought about needing to practice online.

But sometimes you can't make the 7am class, for one reason or another.  And other times you're just really craving an arm-balance heavy practice, or you need a hit of restorative after a week of intensity.  Or maybe you're hungover and your body doesn't want to practice until 5pm.  Or you're brand-new to yoga and a little too shy to take a public class just yet.  Or say you live in rural Alaska and there's no studio around the corner.  Or maybe you're a student or living on Social Security and a couple-hundred-dollars-a-month-yoga-habit is waaaaay out of budget.  Or perhaps you've always wanted to study with Elena Brower and Kathryn Budig, but a trip to a big shiny yoga festival isn't quite realistic.

For all of those reasons and more: helloooooooo, YogaGlo, you sweet populist yoga-source, you.  (I mean, seriously — even the brand logo is adorably populist: "everyone's yoga."  Holler out, my little commies!!) 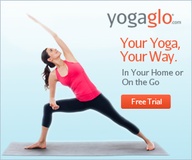 I've been meaning to hit this up for awhile now — not just to have new classes handy, but to keep my home practice fresh, and to feed my own hunger for education and inspiration.  So this afternoon, belatedly, I finally sat down and registered.  And — holy mama goddess!  It's fab.  I can't believe I didn't do this any sooner.  Opportunities to practice with some really legit teachers, at any level you'd prefer, in a diversity of styles, with all kinds of different asana and pranayama emphases.  I'm in love.

So, if you're one of the many who's traveling in the next few weeks, first of all: I'll miss you.

Second of all: here's your answer.  And if you're skittish about long-term commitments, you can even just sign up for the free 15-day trial and cancel if you decide it's not your thing.

But seriously, folks — for $18 a month, which is roughly the cost of one single drop-in class in the city, you can have over a thousand classes at your fingertips.  All you need is a computer, and maybe a mat if you're feeling official.  Bonus points for fresh air and space and heat and whatnot.  But this is the kind of keepin'-it-real action you can enjoy in the comfort (?) of your grandma's basement whilst rocking that old pair of ratty 1993 high school track team sweats you found in the guest bedroom.

If that's not quite enough, google "yoga podcasts" and you'll find plenty, not only on Yoga Journal's website, but also on the fabulous iHanuman.com, which I mentioned the other day.

And if you're in a place so remote that even an internet connection is not an option, go for old-school videos from Rodney Yee or Shiva Rea or anybody, really. 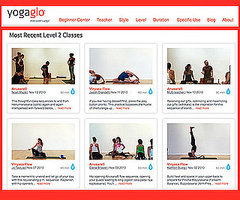 Worst-case scenario, just unroll your mat, sit down, and follow wherever your body takes you.  Self-directed home practices can be challenging for the yogi who doubts her own ability to sequence or challenge, but I've often been pleasantly surprised by the ways in which simply plopping down on a mat can unfold into its own creative and fulfilling practice.

Above all, trust.  You're not alone, even though sometimes when you're out in the middle of the boondocks far away from any organized class, it can feel that way.  But the yoga lives in your body, stored in your cells, hanging out in your muscle memory.  And even if you end up taking a few more days away from the mat than you usually would, have no fear.  That's all a part of the deal, this ebb-and-flow of the practice, you know.

We'll kick your butts once you come back January 1st.  That's why we're here. (Well, that and to remind you to be nice to yourselves.)