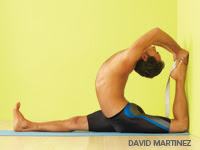 William J. Broad published another fear-mongering anti-yoga article last weekend in the NYT.  "Wounded Warrior Pose," outlining "the perils of yoga for men," is a follow-up of sorts to his controversial piece from about a year ago on why yoga's the most dangerous activity anybody could do ever and you definitely shouldn't do it.  (Paraphrasing here, natch.)

This one made me even more irritable, because it's grounded in a ton of pseudo-scientific-data and full of supposedly-foolproof evidence about how yoga is just sooooo much more dangerous for men than it is for women, and how men are soooooo much more frequently injured than women.

Broad's article leaves, of course, very little space for nuanced analysis, anything approaching psychology or sociology, subtle observations beyond "dudes have tighter hamstrings and more muscle so we should design different poses for them with lots of squats!"

I get so tired of sweeping gender-based generalizations, especially as related to yoga.  Broad notes that most women who are injured from yoga are admitted to the ER because of "fainting."  Oy.  Cue the 19th century gender stereotypes already.

What do you do with something like this??  Let alone the fact that it's published in the NYT, where Broad apparently will continue to write crappy stereotypical things about yoga in this most-respected national platform, given that "he's a long-time practitioner" and all?