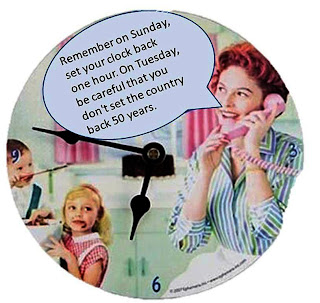 Next Tuesday matters.  A lot.

And I have been quite struck by some of the toothless, wishy-washy, "everything's gravy" silence from the national yoga community at a time when speaking truth fearlessly — satya — really matters, for our future (and the planet's future, and our uteruses' future), yo.

So I was thrilled, yes, thrilled, to see this article published on elephantjournal yesterday.  Read it.  The whole thing. For reals.


"Approaching the eve of this critical election, I’ve been bothered by two political stances within the yoga demographic. One is etheric to the point of dissociation: 'Whatever change we desire will only come through a change in consciousness.' The other is flaccid and polite to the point of meaninglessness: 'Yogis can use the political process to express their values, off the mat.'

Here’s the problem: neither are adequately muscular to the task of preventing a hateful, mendacious plutocrat who evades taxes to tithe to a racist jabberwocky church from seizing the reins of power. My question to the yoga community at large is: why have we not seen a single prominent teacher or yoga organization formally and publicly endorse the Obama-Biden ticket? Do we not want to get our hands too dirty? Are we too busy pretending It’s All Good? Are we even a community at all? ...."


He continues, deftly breaking down these two spiritually-bypassing, evasive stances.

Remski then provides this essential call-to-action:


Here’s my suggested platform, which I think makes sense for the majority of the yoga demographic:

– Given that much more of his platform is actually indiscernible due to his pathological lying and opportunism, and

– Given that he is an ordained operative in an exclusionary religious institution rife with the anti-rationalism, anti-environmentalism, and magical thinking that is anathema to the culture of yogic inquiry:

– Incumbent President Obama remains the better and at least known choice, and should be passionately supported by yoga practitioners.

Simple, no? Anyone disagree? I know: I apologize to third-party advocates. Obama is not a perfect choice, given his mediocre record on human rights, upholding international law, and environmental progress. But the immediate legislative impact of a Romney administration is a far heavier price to pay than the ground we lose in reshaping the electoral landscape. Remember Nader, 2000, Florida. It’s not worth it.

The whole conversation points to the power of using one's voice in a key moment in history, and to the fact that yoga and politics are not mutually exclusive; in fact, the yogi applies her yogic ethics in determining which candidate will better enforce policies consistent with ahimsa, satya, aparigraha, and more. Relegating yoga to an escapist, pristine, softly-lit, incense-scented studio ignores the fact that its foundational ethical system can and should influence the way we move through the world: the way we eat, we breathe, we speak, we work, we love, and yes, the way we vote.

Use your voice.  There is no room for toothlessness here.  Speaking up matters.  Get in there.