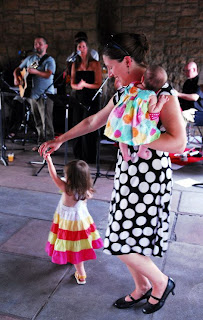 The mister and I spent the weekend in the middle of the country visiting my sister and brother-in-law, meeting their (beautiful) new baby Junia, hanging with their toddling daughter Adah (that's them at right), and reconnecting with the fam. The six of us don't get to see one another very often, you know; my mother's in Nebraska, my other sis and bro live in DC, I'm in San Francisco, and the aforementioned sis is in Wisconsin. So it's always kind of remarkable when we're all in the same time zone.

It was a sweet weekend. Couldn't have been sweeter.

(Though — there's a reason we decided to head back in late September rather than, say, December. Just sayin'. Well-played, Meyer family.)

We got home to San Francisco about 2 o'clock this morning. Tired, but well-lived-in. Traveling is so often quite instructive for me, and for most of us, I imagine. There's something to be said for getting out of your usual space and being plunged into a different reality; it makes you see life, your patterns, your rituals, your resources, in a different light. So last night on the plane between snoozes, I got to thinking about a few big

Jennifer Guise said…
While I wholeheartedly agree with most of #10 I must say that as long as its not uneducated redneck, I do love me a slow, sultry, Southern drawl
October 1, 2012 at 5:28:00 PM PDT