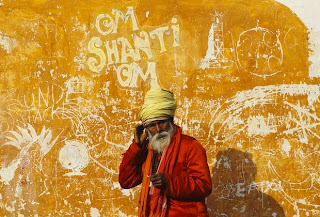 I usually try to spend Monday evenings dripping sweat and bellowing chants at Urban Flow, but last night I'd promised to sub for a colleague of mine in Oakland. Coming on sunset, I'd been running errands in preparation for my brother's visit later this week, and had lost track of time a bit in the dwindling evening light hanging over Polk Street. For a few lazy minutes, cup of coffee in hand, I got lost in the wandering.

But when the clock showed 6:30 and I was still yet at home, due to be in Oakland in under an hour, I realized I needed to hustle. Too late to catch the cable car, and not desperate enough to flag a cab, I pulled on my tall black boots, the ones that power me up and down these unrelenting SF hills, threw some dinner in my messenger bag, and ran out the door.

18 minutes til the 6:58 train at Civic Center. I could get there, if I moved quickly enough.

I hustled down Hyde Street, popping my head in at the Grille to say a breathless hello to Fabio, and hauled down the hill.

Hyde, en route to Market, cuts straight through the Tenderloin, also known as San Francisco's most blighted 'hood. The Loin is a bizarro bleak stretch of drugs and crime and shootings planted smack in the middle of this over-educated, gentrifying, often-elitist techie city. It sits right next to City Hall and Hastings Law School and the Asian Art Museum and all kinds of wealth to the west; it rests at the base of Nob Hill, bastion of old money since even before the 1906 earthquake; and it bleeds right into the Union Square theater district on the east, frightening tourists here and there who make an inadvertent wrong turn and find themselves stranded in unfamiliar terrain.

I dig the Tenderloin. It feels real. It feels honest. It feels non-avoidant, urban, raw. I've lived on the cusp of it, in the area locals call the Tendernob, for some eight and a half years now. It's the kind of peripheral, diverse, marginal space that can't claim wealth or stereotype or racial profile, and it's full of eclectic restaurants and charming shops and old-school laundromats and the like. But, yes, there've certainly been times when prostitutes have stood underneath my windows, or when I awoke at 3 a.m. to find police lights flashing and a body splayed on the street below. So I hesitate to walk much further south into the Tenderloin if it's late at night. 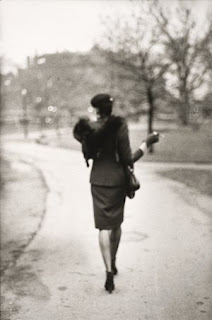 But this, this was early; 6:45, kids, just fine, just barely dark, and maybe it's that I was late or maybe it was the caffeine, but I was feeling ballsy and fearless, so I powered down that hill, past Pine, past Bush, past Sutter, past Post, deep into the land of mini-marts and desolate check-cashing storefronts and lurkers on every corner.

You learn a few things walking in the city. Don't pull out your smart phone to check the time. Don't stop moving. Don't make eye contact. Don't acknowledge skeevy types who harass you. Just keep going. Walk with purpose. And you'll be fine.

But it was dark and I was a lone chick wearing a miniskirt and I felt vulnerable, there, in that moment, my progress halted by a red light and too much traffic to jaywalk without dying. A creepy dude came up and loomed over me, mumbling under his breath. And so, standing on the corner waiting for the light to change at O'Farrell Street, I started singing.

I often fall back on this tactic. Part of the beauty of living in a city full of transients and characters is that a girl can wander down the street belting out jazz standards and nobody looks twice. When I'm feeling vulnerable, say on an evening like last night, smack in the middle of the Tenderloin, I just bust out a chant here or there, and let the rhythm match my stride, and not only does that song meter my breath and slow my wondering mind, but it also generally scares the shit out of passerby enough that they assume I'm a little crazy myself, and hence leave me alone.

Or so I figure.

So yesterday was Maha Shivaratri, the Hindu festival known as the Night of Shiva. The Wall Street Journal (er, how's that for a different perspective?) described it as such:

Monday, Feb. 20, is a public holiday in India for Maha Shivaratri. This Hindu festival is celebrated by Shiva devotees as the day of Lord Shiva’s marriage to Parvati. It is also believed that on the night of Shivaratri, Lord Shiva performed the "Tandava,” a cosmic dance of creation, destruction and preservation.

On this day, Hindu devotees visit temples and offer prayers with much fervor and celebrations, after a day of fasting. Holy men and devotees also rush to major Shiva temples. Women also offer prayers to Parvati to ask for marital bliss.

Ok, then. Given the holiday, naturally there was a lot of talk of Shiva in my yogi circles yesterday. And so I found myself, there on the corner of Ellis and Hyde, turning intuitively to a default Shivaic chant, running Om Namah Shivaya over and over in my mind.

There are a number of translations for this sacred mantra, but I particularly love this one: "Om and salutations to that which I am capable of becoming." These three words, sung together, speak of bowing low to the Self — not the individual self, not the me, the my, the ego, but the big Self, the capital S Self, the Self that means you and me and everyone in between, the Self that is created only and ever in relationship, the Self that reminds us we are ever interconnected, that your suffering is mine and my joy is yours and nothing we do in this life is ever created or destroyed in a vacuum.

We speak of Shiva and in so doing we lift up the cosmic dance, the metaphorical Nataraj, that is the perpetual process of creation, preservation and destruction. We holler out to Shiva and we offer faith in our ability to find a spark of divinity in even the darkest moments of our lives. We sing out Om Namah Shivaya and we say: hell yeah, there is holiness in the horror, there is beauty in the breakdown, there is perfection in the pain.

So last night, barreling down Hyde Street pretending not to feel vulnerable, I sang out Om Namah Shivaya, over and over and over again, crossing the street, passing the guys pushing shopping carts on Eddy, noticing the bars and the grates and the blight and the sorrow and, in a moment of clarity, realizing to myself there, in that dark hour: my god, Rach — here's the Shiva, here's the beauty, here's the divinity, right here, in that dude sleeping on the street next to the fire hydrant with his swollen feet sticking out from under a ratty blanket. 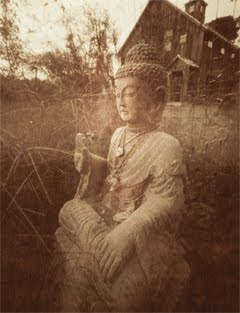 It's easy to get lost in yoga-speak platitudes about Shiva. It's tempting to reduce all difficulty in our lives to that obnoxious, naive sentiment that "everything's exactly as it should be!" We've all had moments of struggle wherein some well-meaning person tossed that gem out and we wanted to punch them in the face right then and there, eh, and say, "Listen, buddy, if you tell me once more that it's 'perfect' and 'beautiful' that my shit's falling apart, and I just lost my job, and my friend with no health insurance has cancer, and her car just got broken into, too, and the country's about to be taken over by crazies who don't believe in birth control, well, you can shove your perfection, because I don't want any of that shit."

(Ok, maybe it's just me who's felt that way. But I know there are other folks out there, too, who can't bear the glossed-over platitudes that we lay theologians can sometimes slip into when we're trying to make sense of Shiva and destruction and loss.)

I realized then, there, rhythmically hollering out Om Namah Shivaya to match my steps, that those few blocks, those thousands of people, that site of so much struggle and chaos and uncertainty and crime and destruction, this refuge to which folks with unraveling lives turn in the midst of the wealth and oblivion that characterizes so much of the rest of this rich city, well, they were the cosmic dance, writ large, and they more than anyone deserved to be sung a sweet Shivaic lullaby, a song of hope in the midst of struggle, a mantra of faith in the potential for dissolution and disappointment to be fertile soil for future creation, eventual joy.

I realized, then, there, that it was very likely many of the folks I passed on the street last night had not been sung to lovingly in a very long time — if ever — and so, it was even more important to sing out, walking by, serenading strangers, repeating Om Namah Shivaya over and over, whether they knew what it meant or not, rippling out that certainty, that celebration, that affirmation, of their divinity, in a moment, a circumstance, a place, that on the surface appears so far from holy.

Part of what I love so much about the city is that the sacred and the profane are continually butting up against one another. There is no removing the holy from the unholy. There is no artificial sanctuary to protect from the blight. There is only interconnection, relation, this reminder that the only fallacy lies in believing that we are ever separate. My relatively privileged life is juxtaposed continually with that of the alcoholic vet on the street who hasn't taken a hot shower or eaten greens or slept in a bed in months. And I cannot turn a blind eye to the reminder that my life is inextricably interwoven with his. And so, we bow in humble gratitude to all that is profane, loving it for its profanity, remembering that that profanity is the very root, the foundation, the ground, of all that is holy, indeed.

Om Namah Shivaya to that.

I've been reading your blog for a few months now and i just wanted to let you know how much i enjoy your writing, your thoughts, your words of wisdom. So thank you!

Anonymous said…
This is very beautiful. I came from a long vacation in the tropics to go back to the freezing cold, unbelievably harsh winter and it is very comforting to be reminded that there lies divinity and bliss. Thank you.
February 21, 2012 at 3:01:00 PM PST

Autumn said…
You always know what to say, when to say it
Thank you for this and for the reminder to trust-and sing-and chant.....

Anonymous said…
You're the best Rach! Right the f&*% on! yes! yes! yes! enough with all the idealistic yoga bullcrap... the beauty IS IN THE MESS, the fear, the untidy, the shame, the guilt, all of it, and even more so I think than the possibility of some completely wholesome perfectly harmonious existence in some pre-packaged market researched kind of way... And besides, all that aversion is just so EXHAUSTING isn't it? And all the self-judgement and scrutiny and shame is so entirely self indulgent. You're my hero! You say it and I feel it! OM NAMAH SHIVAYA! GO ON GIRL! love from MN! xoxo heather
February 22, 2012 at 8:36:00 PM PST

Anonymous said…
I worked in the Tenderloin for a good while, and I must say it is one of the most profoundly sacred places I have ever known...I'm glad you see into the heart of it, and hugely appreciate being reminded of the power of truth in the TL....If you haven't already, I highly highly recommend a Sunday Celebration at Glide!