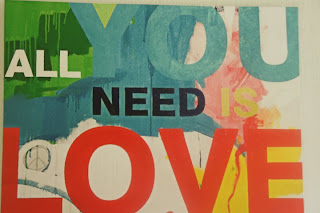 Home and grateful for a wet drippy morning meant for looking ahead.

February's around the corner, and with it, a few changes. I'm stunned to see the calendar already filling up. It's going to be a good, big, moving-and-shaking kind of month.

In the meantime, we huddle inside and fight to stay warm, and try to avoid that Blue Monday sense of midwinter malaise.

After a cold and sleepless night at the Denver airport, around 4 o'clock this morning I brushed my teeth, slapped a little more eye makeup on top of yesterday's, and marched purposefully to Gate B32 to stare down the United Airlines ticket agent as, um, kindly and yogically as possible. Intent upon getting a seat on the 6am flight to San Francisco, I telepathically communicated to the exhausted ticket agent how imperative it was that I get home before things got ugly, and thanks be to Yahweh, found myself hustled onto the flight five minutes before it was due to depart.

I was ready to be home. The weekend in Nebraska brought with it sweet reunions and some much-needed time at the piano, but Real Life was waiting here on Lower Nob Hill, and so on landing in blessed Northern California, I hauled out of SFO and flagged a cab right away to steer myself hurtlingly home through what would surely be rainy, bluesy Monday morning post-49ers-loss rush hour traffic.

Ricky picked me up.

I didn't know his name was Ricky until he shook my hand just as I was about to step out of his cab twenty minutes later. But it was one of those rides, one of those moments, that I can't help but know was quite meant to be.

I needed him. And I think he needed me.

Ricky and I, right off the bat, well, we talked football and disappointing fumbles and kids and love and growing up in the Bay Area and whether marriage was really a smart thing for relationships and what it's like to be 64 and raising a 14-year-old in the age of Internet and texting and we talked boxing lessons and drum lessons and trips to Seattle and he took off his hat about halfway through and I felt like that was a big step, you know, a letting-me-in, an intimacy of sorts, and I saw there a man who was wise and grounded and earthy and real and sharp and possibly, yes, most certainly had a lived a few years on the edge here and there before settling down. 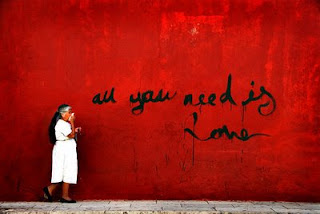 And we bonded, Ricky and I, over what it means to choose to live outside the box, to operate according to your own standards, to refuse to play by the rules. And I told him I'd been a bartender, and I knew then that he got it; one service industry vet always respects the other, knows there's a good strong tip on the flipside, and so things softened even more and we chatted and meandered and I found myself lost in the kind of conversation that rarely comes up when there's not a fair amount of vino or tequila involved to lubricate things.

Maybe it came from the freedom to be real that I have sensed so often over the years from folks on the other side of the bar. That ability to open up to a stranger, the knowing your Shit isn't gonna go anywhere, the knowing it's safe, the knowing there's no one to protect or fear. Or maybe it came from the years on the mat spent practicing being open, being real, being anahata, unstruck. Or maybe it was just a byproduct of my not having slept and, quite punch-drunk from exhaustion, having thrown all caution to the wind.

But I opened up there with Ricky, about living and loving and children and whether any of it was worth it, and about how little you really need to be happy, and about how those big inflated salaries and those long unbearable workweeks that we've seen folks close to us get sucked into are really, at the end of the day, so very unnecessary.

And, climbing Leavenworth toward home, my flat just a few blocks away, I almost didn't want the ride to end. Our conversation felt so real, so unedited, so authentically natural. Ricky told me he was a San Francisco kid raising his son on baseball and drum lessons in the 'burbs. His father had been a big-wig in the film industry back in the day, and had made a lot of money doing it. He said that, driving a cab, he was comfortable, had enough, could live easily enough beneath his means and take his kid to a Warriors game now and then, that sort of thing.

And I felt so close to him.

In the way you do when you realize you're very much the same person with the same resigned understanding of how short this life really is and how very little the material trappings matter and how easy it really is to be quite content with warmth and sustenance and a job that you don't hate.

Ricky and me, we were brothers, somewhere in there, back in the day.

And then, hauling uphill through the Tenderloin, he looked over his shoulder at me and said,

"You know, my Pops always told me, in spite of his money —

You only need three things in life: A solid roof over your head,
some good warm clothing, and a pair of arms to wrap around you.

The rest is bullshit."
I loved him for that.

*
It was grounding to be back on the prairie for a few days, to be reminded where I come from, of what I'm made. And it was sobering, quietly so, to sit in the midst of what has grown to be unfamiliar barrenness: the quiet of the rural setting, the emptiness of the big sky, the whipping of the winter wind. Everything felt more still, more simple, and most definitely more slow. I found my fiery, impatient, fast-paced urban pitta self grounding, calming, rooting, and it felt right.

In conversation with an old friend during the long weekend in Nebraska, our words happened to stir memories of a passing piece of wisdom thrown out some 15 years ago now, a quick bit of advice that my own Pops gave me on my very first cross-country move to the East Coast at age 18, as he turned to leave me in the strange city that would become my new home. He paused, looked over at me in his unsentimental, Nebraska farm kid kind of way, and said, simply, humbly, with that very same tone Ricky used in speaking to me this morning:
"You know, Rach, there's just one thing:
Never forget who you are, or whose you are, or where you come from."
There's great power, great truth, in that remembering.

And the rest? Bullshit.

*
I threw Ana Forrest's new book, Fierce Medicine, in my carry-on as I ran out the door to the airport Friday afternoon. I'd been looking forward all week to having six whole hours of no Internet, no phone, no nothing, to be left alone to get lost in a book for the first time in awhile, and somehow I knew that was the one that needed to come along with me. 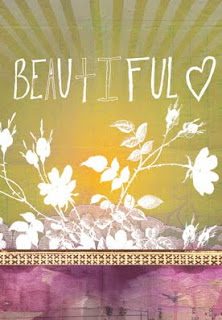 Sure enough, a few minutes after lifting off from San Francisco, I cracked that puppy open and the entire tome was this fierce, fearless exploration of what it means to dive into all our shit: to plumb the depths of where we come from, the beautiful, the grotesque, the painful, the poignant, and the power of staying with all that comes up when we do that, and the liberation that comes in knowing it will pass, in knowing that if we're wild enough and strong enough and soft enough, we'll ride it out.

Forrest's book is the real deal. No joke, nothing spared. The messy stuff of life, writ large on the body, on the soul, on the spirit, that refuses to be beaten down. It's worth your time. It'll kick your butt and encourage you to dive into the sites of all your own traumas, and to see in them opportunities for moving through shadow into light.

Nebraska has been for me, in many ways and for various reasons over the years, that site of shadow in my own life. And so, in barreling breathlessly through Forrest's story in that plane speeding toward Omaha Friday night, I found in myself a new ability to say, hey, it's cool; sit with it; ride it out; watch it; love that guru for teaching you how to stay and be ok.

And the weekend ended up rich with those very gurus, thick with moments, perfect in ways I'd not even expected. As all things do. As even the sleepy-eyed cab ride home this morning did. Ricky and his 14-year-old kid and the wife he laughs with still and his lack of a need to get married before the son came along.

Sometimes out there in the world, just when you're thinking you've got it all laid out, comes along a creature in the form of a cab driver or a fellow airline passenger or even a gas station clerk who reminds you of the truth that all people are simply, radiantly, unquestioningly reflections of the divine. I am grateful for a very early morning that brought Krishna to me in the guise of a gruff, no-bullshit, beanie-wearing cab driver.