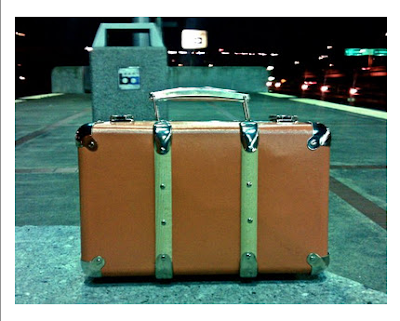 Exhibit A in the Life:
Lunchbox of an Urban Yogi
Some of yous whom I see on a fairly daily basis will recognize the little briefcase at left.

I call it, well, my yogi lunch box.

You see, this urban yoga teacher life, well, it's pretty successfully engineered sit-down dinners out of my routine. Don't get me wrong; I am SO not complaining about getting to spend nearly every night of the week jumping around a studio hollering at people barefoot. I mean, life is good.

But a girl's gotta eat. And she can't eat a ton, because she's spending 4 hours a night in a room heated to 90 degrees plus humidity wearing heavy leggings, and she's likely demonstrating a little Parsvottanasana and a little Kurmasana here and there, too, which makes it tough to walk in with a full belly. And she usually starts teaching circa 4:30 and ends around 10, which effectively bypasses all reasonable dinner hours, well, anywhere except for Spain.

So she gets flexible.

I've been living sans car now for over eight years, and 95% of the time, that is such a rad way to be. Footloose and fancy-free, insurance and gas prices and tire repairs be damned. But living car-free also means living sans having-a-place-to-stash-yer-stuff-when-you're-busy, so when you're hauling from class to class, across the bustling city, and sometimes across the Bay, three or four times a day, with no time to stop off at home, you've gotta get creative, too.

I used to carry an old lululemon bag that was just the right size for a salad, with strong sturdy handles that resisted sticky Kombucha spills. But after that whole John Galt thing, I, well, just couldn't. Felt like I was endorsing them or something, waltzing in with my little black-printed bag. Regular plastic bags are bad news, and fabric bags are a tough bet, since usually a little balsamic vinaigrette or Bragg's Amino Acids or somesuch will seep into it and make everything I own smell like fermented probiotics or weird salty soy sauce. No es bueno. 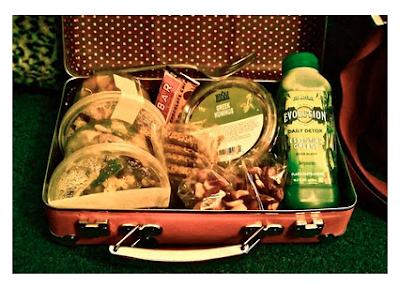 I've had this little guy for years now, so a few weeks ago, I pulled him out of retirement there on my dining room table where he'd found a home storing faded handwritten letters and dog-eared old journals and adhesive mailing labels and the other sorts of stationer's detritus that you really don't know where to keep. And he's proven to be, well, the best thing since sliced (gluten-free) cinnamon raisin bread.

At right: the contents of one urban yogi's lunch(dinner)box, also known as the art installation that is the

Lunchbox of an Urban Yogi

One almost-empty container of Greek hummus

One very large, scary fork for 1) the eating of the above and 2) brandishing at wayward potential muggers on my shadowy late-night walk back to Macarthur Bart after teaching in Oakland.*

* I think I may have a cashew problem. There are bags of unloved, leftover almonds sitting all over my kitchen. I pick the cashews out first, slam the cranberries, and leave the almonds to rot. So weird. What's up with the lack of almond love, Rach?

* That top pic would be said suitcase waiting patiently for the SFO/Millbrae train at Macarthur Bart. Sweet, isn't he?

Buy a damn wee suitcase. It's ever-so-worth it.
And very cute.
In spite of the polka dots.
Labels: art fashion god i feel like a middle-aged lady i left my heart raw foods yoga