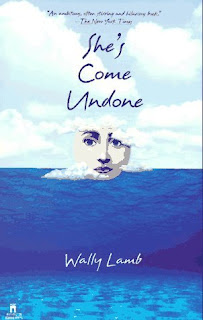 We talk a lot about "getting undone." Undoing has always been one of my favorite definitions of yoga, and sure enough, it gets a fair amount of lip service in the yoga world.

Your shoelaces come undone, usually accidentally. Your bra comes undone, possibly deliberately. The handle on your fabric grocery bag comes undone while you're carrying 2 melons and 6 kombuchas, definitely not deliberately. (And then you try not to come emotionally undone when your 2 melons and 6 kombuchas roll down the street.) There's even a novel by that name: She's Come Undone. I've not read it, but back in the day it was a NY Times best-seller and chosen for Oprah's Book Club and everything, which implies some narrative mixture of mental illness and tragedy and redemption, wouldn't you guess?

So coming undone is a bad thing, but it's a good thing, but maybe sometimes it's both....so what the hell?

*
The woman in yellow led me up a twisting rock staircase, past hot tubs and leafy hideaways and one of the more stunning views of the ocean I've seen in some time. After I'd trudged up the hill, pretending not to be out of breath, she led me into a room at the top of the staircase, a warm one, specially heated, and promptly laid me out on my belly, slathered hot coconut oil on my back, and started pounding out my shoulders like a construction worker taking a jackhammer to cement.

About thirty seconds in, the woman — her name was Pop — groped her hands around my right shoulder blade, and then froze for a second. The muscles there were so knotted up, she started laughing. I didn't have to ask what was so funny. I knew, too well.

Then she slid her hands to the left shoulder blade, felt around a bit, and started laughing again.

And then she turned the jackhammer up full throttle.

Granthis are knots. They're psychic knots, they're emotional knots, they're the subtle energy kind of knots that block the free movement of prana through the 72,000 energy channels — nadis — of the body. You've likely heard of the sushumna nadi, that central energy line through which the chakras run. Well, you've got ida and pingala, too — corresponding with the left and right sides, and if you want to get all binary up in this, the feminine and masculine — and somewhere in there, a few tens of thousands more. 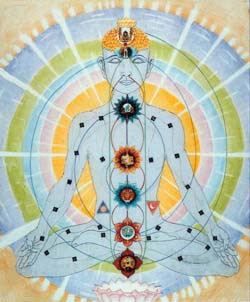 The goal of Kundalini yoga is to pierce these nadis. (Stick with me here, I know). Because when you're stuck, you're stuck. When you feel heavy and lethargic and sluggish, zero life force, that general sense of emotional or bodily malaise, chances are you've got some powerful business going on in your granthis.

Most scholars say you've got three major granthis, running along the sushumna: the Brahma (at the base chakra), the Vishnu (at the heart chakra), and the Rudra (behind the third eye). Makes sense to me. But I've long found this knot imagery useful, far beyond those three agreed-upon main stations along the line.

We develop psychic knots over time. It's not like you have a bad break-up or your cat kicks the bucket and suddenly Shazaam! you've got a magic new granthi in your forearm. No, these puppies grow in the myriads of times we repeat, we repress, we power through, we move under or over something in our lives that's a challenge, a source of melancholy, a source of pain, a source of fear. They harden, slowly, repeatedly, like big ol' invisible rubber band balls, one rubber band at a time, blocking the easy flow of prana through our bodies.

Still with me? I know, it sounds kind of woo-woo.

But seriously. Think about it.

Granthis can be related to samskaras, for sure — those old habits that wear deep grooves into our behavioral patterns, such that after awhile it's so hard not to automatically snap at someone when they piss you off, or to stop downing a bottle of wine every night in order to fall asleep, or to resist diving into a pint of Ben and Jerry's to avoid feeling the disappointment of being looked over for that promotion yet again. 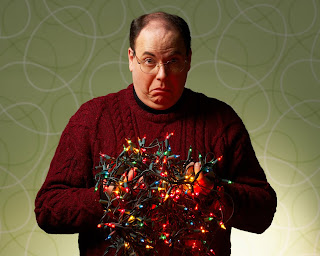 We hit "restart" to become conscious of some of those samskaras, and to maybe find a way to undo the many self-created granthis in our lives. I think of the change in my own life when I cut out gluten. The difference was palpable, in my energy, my relationships, my health, and my disposition. I suddenly felt unblocked, as if all the knots that had challenged my ability to be happy and productive and social and energized had just quickly dissolved like cubes of raw brown sugar in hot water.

I feel dissolved in that same way now, here, this dark, gloomy Sunday evening in Koh Samui, as the smoke rises over the mountains to my right and the wet, muggy night sets in. Having been pounded by Pop and her thumbs of steel, I am broken-in, undone, unraveled, as though the pain and the struggle of every Chaturanga and every hard decision and every loss that I've ever stored in my shoulders has been dissipated, cracked open, released, and fresh life force is streaming through.

*
We tie ourselves into knots. I see it happen in front of my face, amongst my dearest friends and family. Our minds do the knitting, weaving our lives into intricate fabrics of fears and projections and worries and hypothetical realities. And when slowly, gently, over the years we learn to gradually dissociate with that tightening mind, we better manage to soften, and eventually, if we really work at it, to avoid knotting up in the first place.

But sometimes we need help. Sometimes we need Pop with the hands of a construction worker, or we need a week sans sugar and meat and dairy (I suspect this might be true for many of us), or we need some time sans people, or alarm clocks, or responsibilities, to help us get there, to ease us into that unleashed, unblocked state.

The result? That vaunted undoing. That shedding of skins, that unlearning how to be tense and uptight and self-righteous and fearful. We become more childlike, more trusting, less wound up. 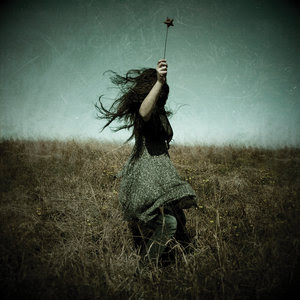 Where are your knots? What heartache are you storing in your hip, and what lost ambition have you lodged in your right calf? What failed relationship are you carrying around knotted up in your belly? And what fear of the future is tangled up in that space just behind your brow?

Start to unravel. The practice teaches us how, you know: we bind in Utthita Parvsakonasana to remind ourselves that we have the power to tie ourselves in chains, to tangle ourselves in knots, and the even greater power to unlock those chains, to undo those same knots.

I always compare the undone feeling to that lightning-fast speed when you reboot your computer after it's been cluttered with open windows and busy applications for one too many days and that whirly-gig colored ball just spins and spins and spins. We open up, restart. New energy flushes in. Revived.

There's no "doing" involved. That's what's so damn hard for many of us, I imagine. And that's why we practice just letting ourselves be there, ready, waiting, trusting in Pop or Pattabhi Jois or what-have-you, resting in that breathless, coconut-oil-slathered state of repose. There's your radical undoing. There's your first step toward flowing.