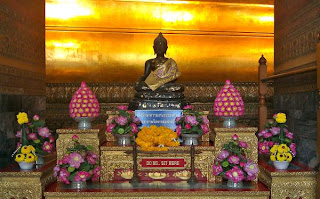 Five a.m. here in Bangkok, and I woke at four ready to rock.

I suppose you could call that jet lag, but honestly, I've not felt even a twinge. For as much as the media created drama about the conditions here in BKK, it's been only easy. And now this morning I'll wrap up my wee initial urban jaunt and trade it for sun and sand, as I fly to Krabi and then longtail boat on to Railay for the wedding tomorrow.

Not feeling much of a coherent thought structure this morn, which seems fitting for this city, which is so much action, so much life, on so many levels: skytrain, sidewalk, river, skyscraper, life on top of life, over and over. So we'll go for some stream of consciousness and call it good.

Loving the urbanity. The anonymity. The not wearing any makeup, the not having a phone (sweet jesus, yes), the not needing to operate according to any particular timeline. How unusual and strangely unfamiliar and beautifully unhooked. It took awhile to get used to the fact that there was nowhere I needed to be, nothing I needed to do. It's been some time since I've felt that deliciously unhinged sense of freedom. And now it feels still the tiniest bit strange and, even moreso, vastly liberating. 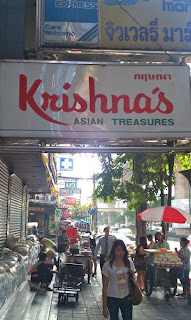 I've hit up a few studios, in pursuit of all things yoga. It's lovely to have an attitude of curiosity with little expectation; particularly after spending 24 hours in-flight (24 relatively painless hours, I might add, in spite of the cramped bod — thanks to Cathay Pacific and their fabulous raw vegan in-flight meals, I felt hydrated, light and full of prana, despite the long haul), it was just such a relief to move and twist and invert and yes, chaturanga. My first evening in the city I hit up Absolute Yoga Bangkok, which is a bright, vibrant, vital, huge space centered smack in the middle of a downtown shopping mall near Chit Lom. Absolute offers a range of classes, mostly Bikram-inspired, and since walking around here in the heat and the humidity is essentially the equivalent of a daylong Bikram class, I decided to pass on the 26 postures and opt for a vinyasa class instead. After sitting for so long, the idea of endless chaturangas at a nice rhythmic pace was pretty attractive.

So I found the studio, arrived early for class and settled in, to find that yes, I stuck out like a sore thumb (Teach looked at me and said: "You new here?" and naturally it turned out he'd done a stint in San Francisco and so knew many of my peers in the yoga world). He then proceeded to teach what was essentially the Ashtanga primary series with a few switch-ups in a melange of Thai, Sanskrit, and a little English thrown in for my benefit. It was so humbling. I felt like such a beginner. And was reminded of the power of the practice itself, and its inherent rhythm, as the 5-breath cycles and the stillness and the jump-backs and the series itself unfolded such that my wondering mind could slow, and in spite of the utter lack of linguistic understanding, get lost in the trans-cultural beauty and power of the practice. Such a testimony for the importance of tradition.

Yesterday morning broke early and after a last-minute Skype date with my fabulous colleague Andrea (modern technology, what!??), I hit the road. It was a big day, and one that started with the simplicity of just watching the city wake up. I've been staying at a ridiculously posh hotel down Sukhumvit Road. Because of the flooding fears, it seems like many of the hotels are not anywhere near capacity, even though it's the start of high season, so I was able to secure a most fabulous last-minute reservation at this 5-star boutique hotel during my quick layover in Hong Kong. It's funky and hip, self-consciously so, and full of stuffed tigers and sexy pop art and blue lights and the below-mentioned rooftop pool, and I kind of love it for its crassness and unapologetic outrageousness alone. 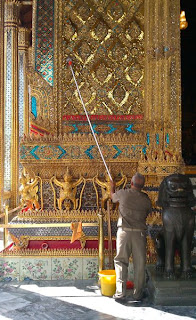 The place is based really within walking distance of much, so as per my usual MO in a new city, I immediately just started wandering. Your feet will show you everything if you just trust, you know?

So yesterday morning's early stroll took me to another vinyasa class, this time at Yoga Elements, another studio high in the sky overlooking Bangkok, situated on the 23rd floor of the Vanissa Building. The space was all spirit in the way that Absolute was all style, and I felt very much at home there in the midst of the Ganeshas and the Natarajs and the like. The practice was hamstring-oriented; I've never done more vertical splits in one class. Shane, the sweet, funny teacher, managed to work in a lot of upper-body work, too, killing it on the handstands and the pincha mayurasanas, and closing with some simple pranayama work that left me settled and silent there in that sanctuary in the sky. This class was taught in English, and I was struck by how powerfully cross-cultural the practice has come to be, no matter the language.

In the same way that, growing up, any church sanctuary or cathedral felt like home, now I find that no matter the city, no matter the language, any yoga studio, any mat, feels like home. And that is a gift.

After class, my stretched-out hamstrings and I headed straight for the river, and with it, the Grand Palace and Wat Arun and Wat Pho and all of the beauty that implies. There's evidence of the floods to be found everywhere, for sure, and many shops are offering discounts to people who have suffered loss from the flooding, but everything otherwise seems to be very much business-as-usual. I spent the better part of the day down there along the river, enjoying the gilt and the history but preferring, actually, the side streets and the tiny vendors and the shops tucked away down narrow alleys where the water was still rushing in past the piers. 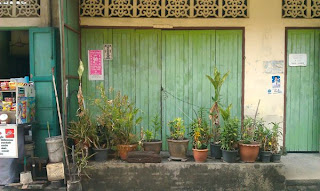 I'm learning: I like spare, bleak beauty better than the ostentatious. The old royal buildings were lovely, yes, but I felt strangely unsettled and crowded and breathless in seeing them, out of my element, and only felt myself again when I could escape to the streets and get lost in people and simplicity and dirt and laughter and the rush of the day-to-day. That's so much more what feels real here: the slipping into the local crowds, the watching the commuters on the train and the teenagers headed for the mall, the listening to the mish-mash of languages in this diverse city, the seeing the impoverished children on the street and wondering what their lives will look like in ten or twenty years, the smelling the endless scents wafting up from any street corner.

It is good to be quiet, and just listen. I have missed this.

It is good to get out of my own story. To disappear into a crowd where I am not a yoga teacher or a writer or a sister or a friend but am rather just a body, sans stories, breathing new air and seeing new sights and getting lost in this very moment, unattached, nomadic, of the elements. Signing off now for this morning. It's time to pack for Krabi, to squeeze in a quick practice before breakfast — I've been living on fruit, you know: papaya and guava and pineapple like there's no tomorrow — to drink my coffee, and then to head for the airport. I'll finish writing the liturgy for tomorrow's wedding ceremony on the beach, and then head to Railay via longtail boat to settle in for the evening. Bangkok's rush and anonymity have been palatable, I think, largely because of knowing that around the corner lies lush greenery and stillness and remote beauty, full of people I love. I am grateful to have a dose of both in these very few days.

AutumnF said…
Ah! I love the pointy headed Buddhas. the heat and humidity and the prevalence of fresh fruit!!!
I'll incorporate some standing splits into your Monday Glow class so they know your spirit is here!!
November 23, 2011 at 3:52:00 PM PST

Victoria said…
Rach: Welcome to Thailand, welcome to the unboundedness that only comes with travel.

I just had to say...you really hit something beautiful here with these words. Travelling right now myself, I felt such a synonymous one when reading this:
'It is good to get out of my own story. To disappear into a crowd where I am not a yoga teacher or a writer or a sister or a friend but am rather just a body, sans stories, breathing new air and seeing new sights and getting lost in this very moment, unattached, nomadic, of the elements.'

Drink it all in.

Victoria, love your blog — thanks for sharing. It's beautiful. I'm so glad you related to that same unbounded sense. It's wild, and refreshing, and liberating, eh?