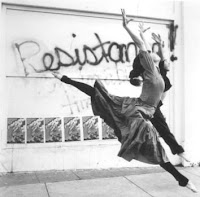 Nothing sets my heart aflutter like a little smart talk about radical theology and American capitalism. Here's a gem from David Loy, who cites Michael Stone's recent call for change in Shambhala Sun.

We've seen a lot of strong (and not-so-strong) commentary on the Occupy Wall Street movement, but this is one of the pieces that has really stuck out for me. It's a sharp blend of political understanding, theologically-motivated activism, and self-awareness. Here are a few tidbits from my highlight reel:

We should appreciate the general, unfocused dissatisfaction that so many people feel, because it reflects a general, unfocused realization that the roots of the crisis are very deep and require a more radical (literally, “going to the root”) transformation.

Wall Street is the most concentrated and visible part of a much larger nightmare: the collective delusion that our present economic system – globalizing, consumerist, corporate capitalism – is not only the best possible system but the only viable one. As Margaret Thatcher famously put it, “There is no alternative.” The events of the last few years have undermined that confidence. The events of the past few weeks are a response to the widespread realization that our economic system is rigged to benefit the wealthy (the “1%”) at the expense of the middle class (shrinking fast) and the poor (increasing fast). And, of course, at the expense of many ecosystems, which will have enormous consequences for the lives of our grandchildren and their children. What we are waking up to is the fact that this unfair system is breaking down, and that it should break down, in order for better alternatives to develop. ....

Most importantly, a corporation cannot love. Love is realizing our interconnectedness with others and living our concern for their well-being. Love is not an emotion but an engagement with others that includes responsibility for them, a responsibility that transcends our individual self-interest. Corporations cannot experience such love or act according to it. Any CEOs who try to subordinate their company’s profitability to their love for the world will lose their position, for they are not fulfilling their primary – that is, financial — responsibility to its owners, the shareholders.

Buddhist enlightenment includes realizing that my sense of being a self separate from the world is a delusion that causes suffering on both sides. To realize that I am the world – that “I” am one of the many ways the world manifests – is the cognitive side of the love that an awakened person feels for the world and its creatures. The realization (wisdom) and the love (compassion) are two sides of the same coin, which is why Buddhist teachers so often emphasize that genuine awakening is accompanied by spontaneous concern for all other sentient beings.