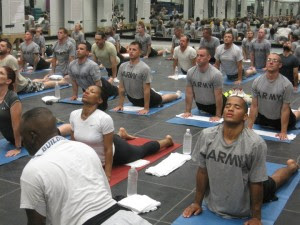 I like to think that yoga's a potentially radical, subversive practice. As teacher Donna Farhi says, “Yoga is one of the most politically subversive practices that any person, male or female, could do in our time.”
Sounds great, right? I mean, go yoga rebels, you.

But in "Yoga for War: The Politics of the Divine," Be Scofield challenges us to shift our focus from beyond our own self-transformation to creating justice in the world around us. Be asks: is the divine really some "anti-war, hybrid car loving, kombucha drinking burning man regular" shaped in our own image? And what about when yoga's used on behalf of war or corporate banking?

If the divine were truly politically subversive and could be experienced via yoga could it be incorporated into the military industrial complex? Why wouldn’t it change the hearts and minds of the air force bombers? How could Goldman Sachs bankers practice yoga and simultaneously defraud people of millions? If any sort of spiritual practice were politically subversive wouldn’t connecting to our highest self mean having our consciousness changed on some political level?

Great questions, all. Uncomfortable, maybe, but great. Read it.