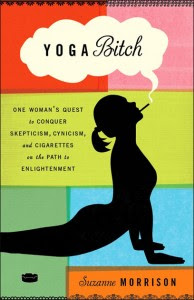 As someone who digs books as much as she digs yoga, I caught this quick article on the rise of the yoga memoir this morning with some intrigue.

Slate's got a short piece delving into the recent rush of "yogoirs" -- personal narratives of people's, ahem, "journeys" on and off the yoga mat. Neal Pollack's Stretch is included (loved this one, remember?), along with Claire Dederer's Poser and Suzanne Morrison's new-as-of-this-week Yoga Bitch. It's an interesting, albeit a bit snarky, read.

Reviewer Laura Moser calls out the post-Eat, Pray, Love phenomenon of self-seeking chick lit narratives popping up in the yoga world at the same time that she gives name to the increasingly commodified nature of the "industry" (ugh, hate using that term, but yes). It's a sharp look at the ongoing attempt to find honesty and authenticity in the yoga world, and the imperative of pulling the practice out of our own tunnel vision experiences and making it about more than just navel-gazing:

It's only in the last year that the fusion of these two trends—the mainstreaming of yoga culture on the one hand, and the Gilbertian journey of self-discovery on the other—has reached its peak. Since last summer, around the same time Libby Copeland wrote a piece for Double X about literary agents being flooded by pitches for the next Eat, Pray, Love, we've seen the debut of a yoga-themed chick-lit series, Rain Mitchell's Tales from the Yoga Studio, as well as a whopping three different yoga memoirs, or yogoirs, or yogalogues, or whatever you want to call this brand-new sub-sub-genre of books about how finding yoga can provide a fast track to finding oneself. The yogic Bildungsroman maybe?

Trend noted. Ambiguity felt. And then Moser made me laugh.

Contemporary U.S. yoga culture readily encourages self-reflection in its adherents—and a good thing, too. But as a narrative device, the leap from mat to matters of the heart just seems too obvious somehow. Now, a really searing Pilates memoir, that's something I'd like to read.

Pilates practitioners, get on it! Couldn't help but chuckle at the apropos title, too. Give it a read. What do you think?