Raw, adjective: 4. painfully open, as a sore or wound. 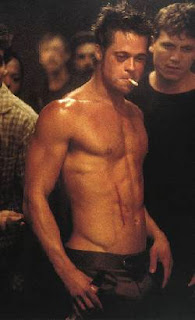 I don't even know how to wrap my head around this. (Hence the naked Tyler Durden pic. Those abs are v. grounding.)
What do you get when you mix Fight Club with evangelical proselytizing, a heady dose of marketing and a good measure of old-school socio-cultural fear? That would be: conservative Christian martial arts programs, “Where Feet, Fist and Faith Collide.” (Yes, that is actually one's motto.) The NYT documents a growing movement combining evangelical Christianity, aspirational hyper-masculinity, and the image of Christ as badass red-meat-eating ninja fighter dude:

Mr. Renken’s ministry is one of a small but growing number of evangelical churches that have embraced mixed martial arts — a sport with a reputation for violence and blood that combines kickboxing, wrestling and other fighting styles — to reach and convert young men, whose church attendance has been persistently low. Mixed martial arts events have drawn millions of television viewers, and one was the top pay-per-view event in 2009.

Recruitment efforts at the churches, which are predominantly white, involve fight night television viewing parties and lecture series that use ultimate fighting to explain how Christ fought for what he believed in. Other ministers go further, hosting or participating in live events.

The goal, these pastors say, is to inject some machismo into their ministries — and into the image of Jesus — in the hope of making Christianity more appealing. “Compassion and love — we agree with all that stuff, too,” said Brandon Beals, 37, the lead pastor at Canyon Creek Church outside of Seattle. “But what led me to find Christ was that Jesus was a fighter.”

Now, there ain't nothin' wrong with a little machismo. I love Fight Club, you know this; it's one of my favorite books (and films); love it for its sexy anger, its subversive politics, its anti-consumptive screed, its iconoclastic spirit. Chuck Palahniuk's brilliant debut novel flirts with all kinds of dishy Messianic themes (Tyler as Messiah, hence Id as Messiah, hence desire as Messiah - hello!), and its pervasively Taoist emphasis on hitting bottom combines with some seriously legit arguments about the over-feminization of American society. And some of the quotes attributed to the leaders interviewed in this article sound suspiciously like snippets from the book itself.
But what these Christian martial arts dudes don't realize, though, scrambling as they are to stop "falling asleep in the pastel-colored pews" is that Fight Club was also fabulously, complicatedly homoerotic. I wonder how Dobson & Co. would feel about the many analyses linking that sexy manly wrestling action with full-on sublimated homoerotic desire? Would they be so keen to embrace it as a means to anti-girly Christianity then?
At the same time, isn't it kind of great that these guys are bringing bodies back into the picture, linking the breath and movement and a certain bodily presentness with the experience of worshiping whatever old-bearded-Charlton Heston-God-figure you might have in mind? That's no different from yoga, really, and is arguably preferable to the long Christian legacy of body-negating liturgies that urged participants to leave their [sweaty, unruly, complicated, lusty, living] bodies at the door, right? And isn't there some truth to the fact that Christ really was a badass angry subversive radical hippie granola gangster dude? Isn't it possible for that hyper-masculine sexualized Christ figure to co-exist with the compassionate cheek-turning lamb-hugger that we've seen depicted in bad paintings all these years? Even if that means the evangelical co-optation of Tyler Durden, that beloved radical culture jammer (and anti-establishment hero) himself?
Whew. Head rush. So many rich cultural contradictions here. Bring on the queer theologians. This stuff is crying out for a good breakdown.
Flock is Now A Fight Team in Some Ministries (NYT)
Labels: bodies books cinema eros gender politics masculinity pop culture red states religion sexuality theology

Paul said…
I so wanna lead the singing at one of these events...

"Everybody, fists in the air."

Anonymous said…
Love this. What a great perspective on an amazing book and its connection to practice.
March 6, 2012 at 11:33:00 PM PST