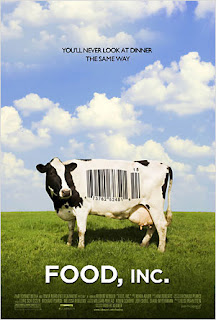 "Food, Inc." opened here over the weekend, and oh man, am I excited to see this one.

If you've read any Michael Pollan or Eric Schlosser, or are at all familiar with Alice Waters-style food ideologies, none of the material they cover will be a revelation. But the media is comparing this new film version of these food progressives' ideas to Al Gore's An Inconvenient Truth, and I can really see why. Now if only this docu will hit the masses the way that one did.

Interviews with filmmaker Robert Kenner abound right now, but I've read two good ones that should give you an introductory glimpse into all the issues going on here: industrial power, the invisible costs of cheap, unhealthy food, the politics of eating local, the potential power of consumer choice, the frightening future implications for the environment, jaw-dropping health problems to come unless things change quickly, and so much more. This is some rich, meaty stuff. No pun intended.

I love how Kenner emphasizes that this is not a Republican/Democrat kind of wedge issue. It's a general human well-being issue, a matter of whether you want to live, and if so, if you want to live well in the doing. Period. One in three Americans born after 2000 developing early-onset diabetes doesn't look like that. It's a quality-of-life issue. As Kenner says in his Salon.com interview, "You don't have to be a Democrat or a Republican to not want to eat meat with fecal matter on it." Zing. Exactly.

Check out the Salon and Chronicle articles linked below; watch the trailer, and keep your eyes open for a screening near you. "Food" opened this weekend in the coastal cities, and should be expanding to wider release soon. I'm seeing it tomorrow - can't wait.

(And is it me, or does Eric Schlosser remind you eerily of Ed Harris? Just sayin'.)

Mariah said…
Mmmm looks super. Paul and I just finished "Omnivore's Dilemma." We listened to it to Nebraska and back...nothing like driving through all that corn while you're thinking about how everything we eat is made of corn in some way or another. :)
June 14, 2009 at 7:43:00 PM PDT