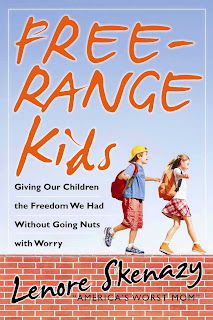 I really love this latest Salon interview with writer Lenore Skenazy, who's penned an audacious new book arguing that in spite of news reports and fearmongering, children today aren't any less safe than they were 30 years ago, and as a result, we should back off and let them run more freely than the contemporary culture of fear would normally encourage.
Free Range Kids strikes me as such a welcome alternative to the normalization of "helicopter parenting" that seems to be increasingly ubiquitous.  Maybe it's a result of growing up in a relatively idyllic Great Plains college town where we walked to school at 6 or 8 and spent hours on rickety bikes pedaling from park to park, but this growing culture of parenting fear - assigning cell phones and curfews and GPS trackers and whatnot - makes me shudder inside.  That freedom to roam until dusk brought the locusts and the fireflies out was the best part of being a kid.
The whole interview is worth a read for Skenazy's refreshingly down-to-earth opinions, but I especially appreciate what she has to say at the very end:

...we've started to think of our kids as the most vulnerable, the most endangered, the least competent, the most, uh, dumb generation in history that needs the most supervision the most hours of the day, literally, than anybody until now.

And when you get a little perspective, you can take these little baby steps and say: "OK, maybe I can let my 9-year-old trick-or-treat [by himself]. After all, at this age if he were living in the Philippines, he'd be running his own vegetable stand, or he'd be riding on the back of a moped with three other kids and a chicken trying to go get dinner for mom."

This is so absolutely true.  I think her emphasis on competence and worldliness is so key; the most liberating gifts my parents ever gave me were tied to the fact that, well, they left me alone to run out into the world and make a few mistakes.  And the result of that kind of freedom to run is a fearlessness about taking on new situations, a self-sufficience that eliminates any daunting quality of moving solo to a new country or continent or even just across town.  I have great disregard for the kind of helicopter parenting that refuses to let this so-important independence bloom.
On another note, I was also glad to see Skenazy mention the increase in fear-based paraphernalia out there that pressures parents into buying useless crap (e.g. kneepads and helmets for toddlers!) and guilts them into feeling like they're not "good enough" or "loving enough" if they don't.  Good parenting isn't about being well-stocked with the latest consumer contraptions.  It's about knowing when to tighten and when to loosen the reins.  And a rejection of the cultural mandate to parent based on fear/worry is a fundamental part of that.
So chill out, my dears.  Yer kids will be just fine.  And they'll thank you for it someday when they're not afraid to pick up and move to Tahiti.
Stop Worrying About Your Children! (Salon)
Labels: books consumerism national paranoia pet peeves

brooke @ claremont road said…
This looks like a great book, Rachel. I'm always afraid I'll become "that mom" who hovers and is concerned with her (future) child's every move. I'll have to add this book to the list of books I should read before having kids :-)
May 5, 2009 at 10:54:00 AM PDT

Bacon Dad said…
I'm with Brookadelica; once you actually have kids it's REALLY REALLY frickin' hard to let them do their own thing. But the problem isn't that kids are less safe, but that the 24-hour-news cycle reports each and every time something happens to a kid, so we FEEL less safe. ::sigh::
May 5, 2009 at 1:51:00 PM PDT

mruhlman said…
love the phrase. when pregnant i actually had a mom or two ask if i know what my parenting philosophy was going to be. there was aparently a menu choice. i wish i had said "free range."
zo is my free range chickidee.
May 7, 2009 at 12:54:00 PM PDT