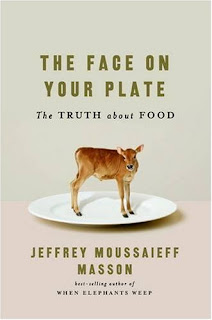 Salon interviewed Jeffrey Moussaieff Masson last week about his new book, The Face On Your Plate: The Truth About Food.  The piece is worth a few minutes of your time.
I love so much about this article.  Masson comes off not as one of those stereotypical hostile vegans, but as a measured, thoughtful activist/writer.  Not only does he refer to himself as "veganish," demonstrating the kind of self-aware flexibility that I find so appealing, but he discusses the whole question of why it's so hard to convince meat-eaters to abandon the slaughter with grace and mindfulness.
Masson's book is another in the steady list of titles that lay out the many rational arguments against eating meat.  He makes so many of the points that I've seen emphasized other places, but here, they somehow seem fresh; maybe it's because he manages to be polemical without being abrasive.  How refreshing.
What else do I appreciate about the interview?  Masson's understanding that he operates as an activist from the radical periphery.  His emphasis on commodification and the way that meat-eating makes commodities of living sentient beings.  His discussion of our cultural denial of death (both of the animals we eat, and our own), and the way that we sanitize meat-eating to avoid engaging with the realities of violence and slaughter.  And finally, the way he's so clearly aware of how fundamentally food is interwoven into culture, and how the politics of food are so deeply intertwined into the socio-political aspects of our lives.
Sweet.  Read the book.  Eat a carrot.
Don't Have a Cow! (Salon)
Labels: books commodification cool progressives food politics of food sexy intellectuals

freelancer said…
I read an article about that in the NYTimes. I will have to check out the book. I may start moving towards a more vegetarian life.
April 24, 2009 at 5:07:00 PM PDT