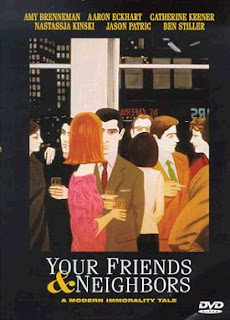 Another crackling film for you to see once you schlep yourselves out to Enlighten Up:
Neil LaBute's Your Friends and Neighbors.
And no, it's not just because I've had this LaBute thing going on lately.  And no, it's not just because Aaron Eckhart is my latest movie-star boyfriend for whom, although I'm not really the marrying type, I'd quickly slap on a ring.  And no, it's not just because it's dark and cynical and smart and sexy.  Although that's part of it.
Really, you should see it.  Released in 1998, so it feels a little dated, if only in the fashions and the fact that most of these ensemble players have moved on to legit celebrity-sized careers.  Ben Stiller, Catherine Keener, Amy Brenneman, Jason Patric, and of course the above-mentioned Eckhart all shine in LaBute's comedy-drama of manners.  It's dark and it's anti-suburban and it's, well, yeah, I'd say it's pretty damn anti-marriage, and it's realistic and sharp and snappy and snarky and so frankly, well, frank about sex and relationships and gender and the fact that we talk not enough or too much or not about the right things, and on and on and on.
Watching this, I thought to myself: my god, I know these people.  The acting is nuanced and sharp and the writing even moreso; LaBute is so unflinchingly in touch with the real textures of relationships, particularly as related to the complexities of sex and monogamy and plain irritation, that I just laugh even thinking about the incomparable drivel being produced by other rom-com writers like Nancy Meyers right now.
Seriously, watch it.  And not just for the usually-dreamy Eckhart's transformation into mushy suburban mustachio'd mode.  But for LaBute in fine form.  And a searing look at YOUR friends and neighbors.  Because you know this is the really gritty and delicious stuff of life going on behind the tight smiles on the stiffly-posed family Christmas card photos that land in your mailboxes every autumn.  You know it.
Delicious ambiguity.  LaBute scores again.
Labels: artificiality cinema future ex-husbands gender politics marriage masculinity sexuality suburban distaste writing