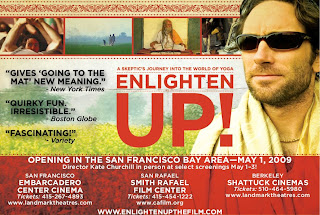 Yesterday I attended  a preview screening of the new film Enlighten Up!, which opens here in the Bay Area this weekend.  We were also lucky enough to have a few minutes of Q&A with the director, Kate Churchill, following the screening.
While reviews seem to be somewhat mixed, the piece being what it is - I really enjoyed it.  And I recommend taking an hour or two to catch it yourselves if you have time.  Whether you're a yoga expert or a novice, it's a pleasant little travelogue-style introduction to the questions of transformation, spirit and body inherent in the whole yoga project.
The obligatory website blurb:

Over 16 million Americans practice yoga today, and it has become a multi-billion dollar industry. For some people it is a workout, for others it is a spiritual path, and for others it is a great business. Filmmaker Kate Churchill is determined to prove that yoga can transform anyone. Nick Rosen is skeptical but agrees to be her guinea pig. Kate immerses Nick in yoga, and follows him around the world as he examines the good, the bad and the ugly of yoga. The two encounter celebrity yogis, true believers, kooks and world-renowned gurus. Tensions run high as Nick's transformational progress lags and Kate's plan crumbles. What unfolds and what they discover is not what they expected. Featuring B.K.S. Iyengar, Pattabhi Jois, Norman Allen, Sharon Gannon, David Life, Gurmukh, Dharma Mitra, Cyndi Lee, Alan Finger, Rodney Yee, Beryl Bender Birch, Shyamdas, Diamond Dallas Page and many more!

Nick Rosen makes for a pretty dreamy guinea pig, and Churchill & Crew's many jaunts across the world to meet these gurus and practice at various studios offer an entertaining glimpse of the international yoga scene.  Though Churchill's project doesn't necessarily end the way she thought it might, the real yogic lesson of the film might in fact lie in that very lack of resolution.
I tried to scribble a few notes in the dark theater, which pretty much just resulted in a few pages of illegible chicken-scratches, but the few juicy bits I did retain are worth remembering.  These themes will not be unfamiliar to anyone immersed in any kind of yoga study.  They include, among others, 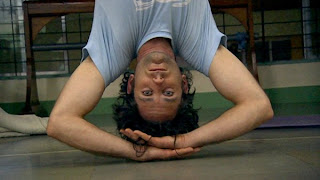 Ok.  So none of those ideas are probably unheard of in these parts.  But there was something lovely about seeing them worked through onscreen in the midst of beautiful vibrant colors, lush cinematography and meandering music.
Rosen wrote a quickie piece for the HuffPost a few weeks ago about his experience making the film.  Give it a read here.  And then wander on over to the official film site for a trailer, video clips, and details on the film's run here in SF and beyond.  Official opening weekend is Friday, and Churchill will be making a few more appearances at screenings, so take a close look at the flier at left for details on that.  There's also a brief interview with Rosen and Churchill over at NPR if you feel so inclined.
Going to the Mat: Confessions of a Yoga Guinea Pig (HuffPost)
Enlighten Up! Official Site
Film Asks if Nirvana Through Yoga is Possible (NPR)
Labels: cinema hot boys with big hair philosophy yoga

Jess(ica) said…
I've wanted to see this for months! I am so jealous! And now your observations make me want to see it even more!