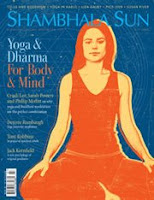 I've been thinking a great deal about what it "looks like" to live as a yogi. Not so much a psychology of ego/self/etc, but more an exploration of ways of being in the world. The kind of yogic "being" that extends far beyond saying "bliss" a lot or wearing flowy clothes or using that stereotypical monotonic "yoga voice."

Last night I had the too-short pleasure of hearing Paul Ekman and Pico Iyer trade thoughts on the Dalai Lama; more specifically, they asked: what can we as individual human beings learn from the Dalai Lama? And this morning as I reread my notes on their answers to that question, I found what sounded very much like the description of an embodied yogi.

How'd they describe him?

* As the epitome of flexibility.
* As lacking any concern for status.
* As possessing a legendarily contagious sense of humor. (Ekman said he'd "never laughed so much in my life" as when he spent time with the DL.)
* As without guile. Trusting, almost to a fault. ("He'd make a terrible poker player. He wouldn't know how to bluff. He plays with all the cards face-up.")
* As believing that it is much better to be a student than a teacher.
* As believing that it is much better to listen than to speak.
* Possessing a remarkable patience.
* A self-proclaimed heretic. Lacking in dogma.
* Fundamentally good. ("In his presence, you experience palpable goodness.")
* A grounded realist.
* Lacking in ego or self-concern.
* Like Mozart or Michael Jordan in his insistence on incessant practice. ("An Olympic athlete of compassion." - Ekman)

Iyer described the DL's ability to "communicate things just through the way he moves through the world." That, to me, sounds like the ultimate embodied yogic way of being.  Iyer emphasized the notion that everything is in flux, that transformation is "incremental, moment by moment, heart by heart," a vision of revolution through very concrete everyday means.  Here, "politics starts in the heart - and in the imagination."  This transformation can be practiced in the process of doing "brain gymnastics;" in developing awareness and compassion, we can train for happiness like it is a muscle to be built up.
Iyer repeated that Buddhist notion that strikes me as so fundamentally lovely - the idea that "we don't suffer from original sin, but from original goodness," and that practice is thus not a process of developing, but of uncovering.  Love it.
(Apparently KQED was broadcasting, so maybe if you're lucky, you can find a podcast there.)
Labels: buddhism politics sexy intellectuals yoga