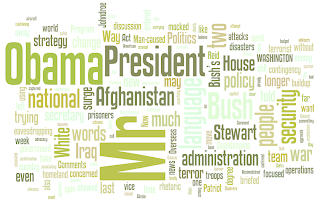 Words matter.  Words really matter.  We know this, right?
Semantics are underrated.  If I could go back and do six more bachelor's degrees, one of them would be in Linguistics (right after Art History and Kinesiology and Vocal Performance and...).  Words are powerful.  We think they're just these harmless little guys that make up sentences, but they're laden with all kinds of history and social power and cultural baggage.  That's why I say "anti-choice" instead of "pro-life;" that's why "oriental" is now obsolete; that's why Bush's naming of his "Homeland Security" department as such sent a chill up my spine.  (Nazi Germany, anyone?)
Anyway.  The NYT has a quick piece today on how the Obama administration is stealthily reshaping the language used in the current public dialogue and abandoning the baggage-laden rhetoric of the Bush Era.  Think words like "surge," "patriot," and "war on terror."  Whew.  I love this.  Super-interesting subtle way of restructuring the national mood and scraping away the remnants of the culture of fear built so deviously by Bush and Co.  Read the article.
On that note: I discovered the most fantastic little toy this morning.  Wordle.net.  You can plug in any combination of text, hit "Go," and out pops this lovely little piece of word-art (called a "word cloud") which you can then manipulate with any number of fonts and colors.  I dig it.  Go.  Play.  It's the best.  (This one at left is a product of the text from the article mentioned above.)  The program weights the text such that the most-commonly used words are featured most prominently in the art.  Sweet.
The Words Have Changed, But Have the Policies? (NYT)
Wordle.net
Labels: art bush sucks politics words