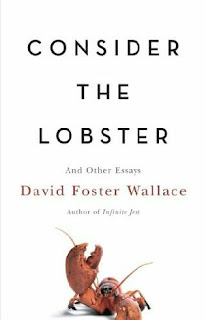 Have you had a chance to read this piece on David Foster Wallace in the latest New Yorker?
It's long, and it's dreary, and it's difficult, but it's also touching, and shattering, and worth your time.  It's only been six months since DFW committed suicide, but some of the truths behind his last few years seem to be beginning to emerge.  D.T. Max writes that

"The sadness over Wallace’s death was also connected to a feeling that, for all his outpouring of words, he died with his work incomplete. Wallace, at least, never felt that he had hit his target. His goal had been to show readers how to live a fulfilled, meaningful life. 'Fiction’s about what it is to be a fucking human being,' he once said.  Good writing should help readers to 'become less alone inside.'"

Isn't that the truth?  Just like music or dance or any of the arts help assuage that loneliness that is such an endemic part of the human condition, so should writing stir some sense of connection, however fleeting that might be.
Read the piece for a dissection of DFW's youth, his evolving po-mo writing style, his struggles with addiction, and his relentless inner self-critic.  But then please pause for a minute and just roll around in this blurb from an old letter to Jonathan Franzen, describing DFW's memory of what it feels like to finish a piece of stellar writing.  It's one of the best renderings of this exhausted pleasure that I've come across:

“I think back with much saliva to times in 1984, 85, 86, 87 when I’d sit down and look up and it would be hours later and there’d be this mess of filled up notebook paper and I just felt wrung out and well fucked and well blessed.”

Um, yes.  But, by all accounts, it sounds like he struggled to recover that feeling as the years went by.  So take a few minutes to traverse the narrative of DFW's difficult and brilliant life. Somehow these post-mortems make it seem superficially easier to paint a life in a certain trajectory; I'm not sure that I wholeheartedly embrace such a contrived linearity, but I enjoyed stumbling along with the story of this writer's too-short 46-year struggle with what it meant to be alive.