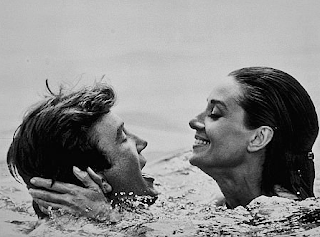 On the urging of a friend in-the-know, over the weekend I spent a breathless two hours with Albert Finney and Audrey Hepburn, circa 1967, in Two For the Road.
What a smart, stylish, sophisticated, unsentimental piece of art.  The film tracks the 12-year history of Finney and Hepburn's Mark and Joanna Wallace, a successful couple living in Europe whose relationship blooms and wilts on the beaches and roads of the South of France.
Watch it for Hepburn in some crackingly-Mod Riviera fashions and the most fabulous sunglasses this side of 1965.  Watch it for Finney's dashingly snarky golden young Redford vibe.  Watch it for the screenplay's trenchant analysis of annoying American ex-girlfriends, hyper-organized fastidious husband-types, and several young 60s beauties singing and strumming a guitar in a VW bus.  Watch it for the sharpest and most subversive social commentary on sex, marriage and infidelity that I've seen in years.  Watch it and realize how shitty and superficial and bland and boring anything approaching romantic comedy these days really is.  Watch it and know you'll never be able to stomach another contrived Aniston/Affleck or Hudson/McConaughey pairing again.
Watch it for the refreshing portrait of a couple who laughs and curses and takes the piss out of each other, from the very start.  Watch it and realize that the possibility for thoughtful and many-layered reflection on the nature of love and sex and relationships and intimacy is greater than you remembered.  And then go back to 1967 to find all of this, lovingly accompanied by more of Henry Mancini's meandering melodies.  Finally, watch it for the complicated love story that ends with two very loaded words, when Hepburn and Finney alternately turn to one another as they cross into Italy and say, making eyes at one another through their fabulous 60s sunglasses:
"Bitch."
"Bastard."
Ain't love grand?
Labels: audrey cinema dreamy fashion future ex-husbands lederhosen marriage the beach wanderlust

vijay said…
FInd Sunni or Shia bride and groom on Matchfinder's Muslim matrimony. Search your match on easy to use online platform.
April 30, 2015 at 10:49:00 PM PDT