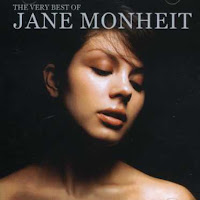 The sun has finally settled in for a long stay here in the City, and accordingly I've found a home at a well-lit, high-ceilinged, airy wannabe-Parisian cafe most afternoons this week.  Tucked into a window there, I can go swimming in a big soupbowl of strong coffee and get lost in the primo late-afternoon sunshine (and actually get some work done, too).
But my ears perked up and my breath caught in my chest the other day when, overhead, Jane Monheit started warbling one of my favorite jazz standards in her cool clear soprano.  "Spring Can Really Hang You Up the Most" has long been required playing on my "Best Of" lists; it's kind of a sleeper compared to some of the other classic jazz charts you hear covered all the time.  I have a decent piano version that I plunk out on a regular basis, but I haven't heard it performed much.  So I was mesmerized to hear Monheit's still, melancholy version fill the air in the cafe.
I first discovered Jane Monheit on one of those long cross-country drives circa 2000, when the old white Reliant's windows were rolled down, the radio was cranked up and the gas station crappuccino cup was always full.  She was being profiled on NPR, a new rising star at the time, and I dug her loose lyrical soprano immediately.  (Now, I know some of yous aren't so much fans, for one intimate reason or another; that's cool, no worries; but I can't help but enjoy Monheit's work nonetheless.)
Go to rhapsody.com for a listen.  "Spring" comes from Monheit's 2001 "Come Dream With Me" album, which also includes stellar standards like "I'll Be Seeing You" and "Blame It On My Youth."  Just click on "Spring Can Really Hang You Up the Most," sit back, close your eyes and check out for about six minutes.  You won't regret it.
Jane Monheit at Rhapsody.com: Come Dream With Me
Labels: coffee i left my heart jazz music sunshine

Bacon Dad said…
Two things:
1) Somehow, this song eluded me, but it is indeed the Bees Knees. I'm gonna grab the sheet music later and pound it out.

Anonymous said…
Ack! Was not expecting this one, I'm traumatized all over again. ;) The girl can sing, I have always given her that, but she is actually a demon. Matt, take her off your list, she is not truly worthy.
BTW, Bette Midler does a nice job with Spring.
March 16, 2009 at 1:50:00 PM PDT