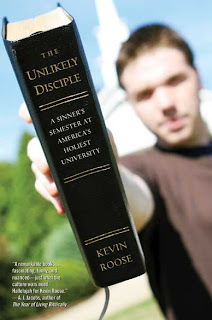 Did you catch this clever excerpt in Salon today?
Kevin Roose, a student at Brown University, went undercover for a semester at Liberty University, Jerry Falwell's training ground for rabid Christofascists (um, I mean, "Christians").  Salon has published an excerpt from his new book, The Unlikely Disciple: A Sinner's Semester at America's Holiest University.  It's pretty killer - and cringe-inducingly familiar for those of us who've been surrounded by the evangelical subculture at one time or another.
This particular blurb chronicles Roose's spring break missions trip to convert the doomed hell-raising masses at Daytona Beach.  It's strangely sad, in a misguided and heart-breaking kind of way.  I had a hard time not cluck-clucking my way through the article, so was pleasantly surprised to find a touch of genuine empathy and compassion toward the end.
Definitely a book you'll want to check out, whether you're on the Falwell team or its secular liberal rival.  There's something to be said for intimately knowing what the other guy's doing behind closed doors.  Roose's conceit is a clever one, and I'm looking forward to digging into the rest of his story.
What Would Jesus Do on Spring Break? (Salon.com)
Labels: bad religion books christofascism sigh