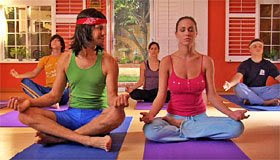 There's a line of yogic teaching that argues that laughter is the highest form of meditation.  The idea is that laughter offers an unconscious stilling of the mind and a return to the embodied breath.
Think about it; when you're in the middle of a gasping belly laugh, you're momentarily not thinking about the taxes you need to file or the groceries you need to pick up.  Your mind shuts off and your body and breath and instinctive physiological reactions take over.  And in that moment, you are lost in what is most certainly a meditative state, even though there may not be cushions or chanting involved.
Life these days looks a lot like Sanskrit and om shanti and yoga mats and ancient texts.  It's easy to get lost in the seriousness of these ancient teachings on the meaning of life, easy to float off on theoretical cruise ships, lost in seas of mumbo-jumbo that don't feel much related to the Real World.  As I mentioned the other day, one of the qualities I'm most appreciating in many of the master teachers who've meandered in and out of my life these days has been their humility and self-deprecation.  Several of them were monks in India for decades, or started out practicing in somebody's garage back in the day; they bear a certain lightness that I find supremely aspirational, and completely disarming.
My colleagues and I sat yesterday over a shared feast of hippie delights, lots of raw foods and Bragg's Amino Acids and whatnot, and I found myself listening to conversations about practice and meditation and gurus and retreats.  In that context, it's easy to get lost in the hippie-speak and lose your sense of perspective.
That's why I've always appreciated this rip-roaring video spoof featuring Ogden, the Inappropriate Yoga Guy.  I've laughed over it with countless friends over the last few years, we were laughing about it yesterday, and I'm laughing about it still after revisiting it again this morning.  I've mentioned it before, but I'm going to paste it here again, because it's such a good reminder how foolish it is to take ourselves too seriously.  Namaste, Ogden:
One of my friends in the program works for YJ, and she shared a few sneak peek links with us this morning.  Apparently "Ogden" was in the SF offices last fall filming a few new clips, which are, of course, hilarious.  I don't think they're public material just yet, but as soon as I find out that they are, I'll share them here.  So look forward to more Ogden, more blue spandex, and more bad hippie headbands.
In the meantime, keep laughing.  It's good for your body, and better for your mind, and exactly what you need in this economic situation, especially.
Labels: funny shit meditation yoga