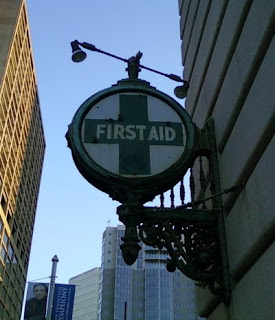 One of the first things you learn living in this city is how to weave along the flat blocks.  No fool climbs Nob Hill after learning which alternate blocks will take her around it instead.  The result is that you often end up walking the same route every day.  There are whole chunks of city you never see because you get stuck in your efficient (less-cardio) grooves.
But every Monday night for the last few months I've rolled down the hill on my way to my Sutras class, and walked one block over from the usual path.  And every Monday night I stop dead in my tracks, in spite of how late I'm running, and notice this old rusted sign hanging like a forgotten set piece from some wartime film set that the art director neglected to remove in the process of hastily erasing the evidence.
It hangs in this alien space near City Hall, on the edge of the Tenderloin, on the cement walls of a once-hospital that has long since been turned into one government building or another, in between various tall condos and city buildings.  It's rusted and tired and completely juxtaposed with the contemporary architecture surrounding it, and I'm not even sure whether it's WWI or WWII, but I wonder why it's stayed as long as it has.  Did someone forget to knock it out?  Or just not have the heart to remove it?
Whatever the reason, it's a jarring and welcome reminder to stop, stand still, and pay attention to the living history above and under and around us.  I wonder about the other young women over the last century who've walked under that sign and looked up and seen it standing out against the clear cold twilight sky.  Who then hurried on in the bustle of traffic and streetcars and drug deals to make it to dinner, to class, to work on time, like I do now, in this century, on this particular evening in spring.
Labels: architecture art i left my heart nostalgia random stream of consciousness