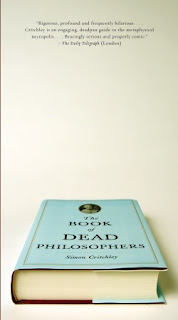 Fascinating read over at Salon in Laura Miller's review of Simon Critchley's newest work.
"The Book of Dead Philosophers," just out last week, gathers the death stories of a few hundred of history's most famous philosophers, and, in the process, says a little about mortality, its inevitability, and why we fear and/or disengage with that reality.  I dig the conceit.  What a clever way to structure a heavy, dark philosophical venture into some of the more sobering questions of existence; I for one would much rather delve into those thoughts when bracketed by stories of Plato's death by lice infestation and something-or-other about someone being scraped to death by Christians bearing oysters (no, really).
I've always preferred sociology to philosophy not because I don't have a certain fondness for philosophy, but because sociology always seemed to offer the same kind of theoretical mind-wandering but with a social agenda, not just for the personal pleasure of losing a few hours sitting under an apple tree discussing the meaning of life with other blowhards.  But the question of death and its centrality not just to philosophy but especially to religion seems to me one of the most valid conversations to be had, and not just when you're old or terminal or ready to pull the plug.
We don't talk enough about death; this is obvious, American culture is all about glamorizing youth and denying mortality, blah blah blah; we know this.  Part of what has always drawn me to Buddhism has been its refreshingly matter-of-fact and unrelenting insistence that all beginnings end in separation and that, in that process, life is suffering; how honest and lovely and frank this awareness has always felt, as opposed to the rose-colored otherworldly views offered by some other traditions.  Life always manages to remind us of the plodding approach of the Grim Reaper whenever we find flighty distractions that allow us to, however briefly, avoid that truth, whether it's in the form of surprising "too-soon" deaths (a la Heath Ledger), personal losses of those dear to us, or the annual reflection on death that is the dreaded/beloved birthday.
Maybe it's because in the course of the next week I'll be turning into a Very Old Lady, but I've had time and death and aging and her bedfellows on the mind lately.  Perhaps that's why Critchley's book strikes me as so fascinating, so clever, such a good read.  Even the review itself offers tantalizing teases of philosophical truths.  Miller writes that

the great deficiency of modern life lies in our too-common unwillingness to fully acknowledge our mortality. Frantic to "deny the fact of death," we "run headlong into the watery pleasures of forgetfulness" -- namely, traditional religion and New Age claptrap promising us one or another form of immortality.

She later goes on to discuss Montaigne and the fear of death, in a paragraph that froze my breath in my throat.  Here we see flashes of consonance with those old Buddhist and yogic themes of being present in the moment, rooted in and blossoming out of meditation practice:

Fear has an uncanny habit of fulfilling itself, and so the overwhelming fear of the end of life can make life itself nearly endurable, as it becomes entirely consumed by the fear of death. How much better, Critchley writes, to seek in philosophy "the stillness of the soul's dialogue with itself" (a lovely turn of phrase) and the "calm that accompanies existing in the present without forethought or regret." The ideal philosophical death, then, is peaceful, accepting and dignified.

And so on.  Read the review; read the book.  Keep thinking about death.  We can't pretend to be concerned with the question of what it looks like to live well if we don't also take into consideration the full-stop that awaits at the end.
How's that for a happy Monday?
Let Death Change Your Life (Salon)
Labels: books buddhism death meditation philosophy religion sexy intellectuals sociology sorrow