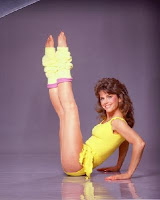 Did you see this profile in yesterday's NYT spring theater special?

You should read it, because, really: how can you not love Jane Fonda? The woman - I mean, the "radical vixen" - is starring on B'way again at 71 in the wake of a life that's taken every twist and turn you can imagine. Charles McGrath writes that

"While the rest of us have just about managed one life, she’s had half a dozen. She has been a sex kitten, a fashion model, a radical and war protester, an Oscar-winning movie star, an exercise impresario and the consort of a billionaire."

All true. She's complicated, interesting, curious, and ever-changing. She nonchalantly said "c@$t" on morning television, which I kind of loved. She's done mad political work, married Ted Turner, performed with Eve Ensler, run an aerobics industry, pissed off right-wing warmongers and worn some seriously badass legwarmers. All in all, she's the kind of fascinating and and lived-in and many-pronged creature I'd like to be when I'm 71.

Anonymous said…
Did I ever tell you about meeting her? And I owe it all to you!

It was at one of the V-Day empowerment thingies in Boston a year or two after you'd left. We ended up in groups talking about why we'd gotten involved and our group session ended with her giving me a hug (because I was weepy and emotional, per usual).