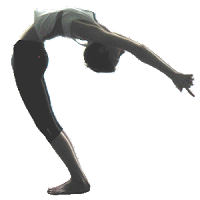 If you're not familiar with the Bikram world, but perhaps you've heard of the bizarro existence of yoga competitions, this is the center of that phenomenon. Bikram and Co. hold several regional competitions in the fall of each year, and these culminate in the "international championship" every February. As you can imagine, Neal Pollack's article is at once snarky and awed.

I don't want to get into whether I'm a fan or not. I think most of us who are at all interested in the classical roots of yoga realize how antithetical the idea of a yoga competition is to the entire philosophy of the practice. Because yoga is so much more than asana. At the same time, I've been practicing Bikram's athletic series for over 5 years now, and in spite of the commodification and commercialism and whatnot, from day one it has never failed to rock my world. So, in terms of this competition thing, I exist in some grey space between the black and white of sheer condescension and admitted awe.

Anyway, read the article. It's a fair treatment of one of the weirder aspects of the Bikram world. Several of the former winners have taught at my studio, and I have to admit, their bodies do possess the kind of elegance and grace Pollack highlights. Though I think the competitive aspect of asana is kind of ridiculous, I do think there's merit in having a goal to work toward. And if this provides that kind of purpose for these yogis, then more power to them.