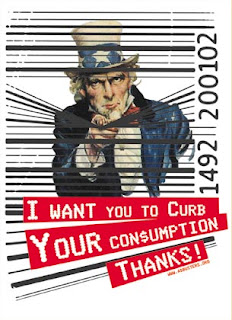 Striking interview with one of my favorite writers in this morning's Chron.

John Robbins has a fascinating story. He grew up an heir to the Baskin-Robbins fortune, which he rejected fairly early into adulthood in favor of being an advocate for vegetarianism, the environment, and sustainability. His books like Diet For a New America were fundamental to me in my early twenties as I sought to understand the connections between the politics of food and economic/environmental disparity/damage. I've always respected his ability to reject the certain material wealth that would've come with his inherited lifestyle and instead to commit to a life of something he really believed in.

Robbins lives in Sebastopol, which makes him one of the many health progressives (like Dean Ornish, etc.) who are based in the North Bay. I think I may have even glimpsed him in a few of my yoga classes over the years. Obviously I have an activist crush on the dude. So I was saddened to find this sobering news in David Ian Miller's latest "Finding My Religion" article.

Turns out Robbins, along with several other local writers I've read about recently, lost 98% of his net worth in the Madoff Ponzi scheme. Now, at 61 (and after building up a long career as a successful activist and author), he's scrambling to pay the bills. The interview is an unexpectedly thoughtful reflection on spirituality, consumption, and the meaning of "success" in contemporary America. Robbins says:

We have defined the good life in terms of accumulating stuff. In our society, if you say somebody is a success, what does that mean? It doesn't usually mean that they are an emotionally balanced, loving human being. It doesn't necessarily mean that they are creative and artistic and adding beauty to the world. We reserve that word for people who have made a lot of money. I find that to be illustrative of a way of thinking that has caused us great spiritual impoverishment and has caused the planet massive devastation; it has also pitted us against each other by breeding a hyper-competiveness out of which we have exploited other people and harmed them for financial gain.

I couldn't help but find myself thinking of the notion of "non-attachment" here. It's experiences like this that remind us how foolish it is to get too attached to any worldly notions of security. Process theology (and quantum physics, and Buddhism, and yogic theory, really, too) emphasize that life is one process of constant change. The never-ending cycle of gain and loss and attempting to find one's feet again seems to me a perfect representation of how important it is to not place undue attachment in ephemeral things of the world.

(So I'm sorry, but I don't give a shit about your hot cars or fancy watches. Because they can be gone in a second! And then you're just left with yourself. So why not focus on making that empty self someone you can sit with once the material trappings are stripped away??)

Jess(ica) said…
I have been thinking about nonattachment and material wealth a lot lately as I look for my next job (to start this fall). I appreciate your thoughts and reflections.

Anonymous said…
You pretty nailed it on the head here rach-after losing all of my stuff the other night, you just have to let it go. what is the point? it is all so impermanent anyway...
February 24, 2009 at 8:45:00 AM PST