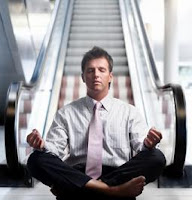 Did you happen to catch this article in the NYT the other day?
"Yoga and the Missing Boutique" makes the valid point that, tough as it sometimes is to be the lone dude in a yoga class, it can be even tougher finding something appropriate to wear that won't be at once too revealing or too bulky.  As you know, one of my pet peeves is when yoga practitioners place more emphasis on attire than asana; nothing gets my goat like a $75 pair of Lululemon workout pants that's hardly lived in because the wearer doesn't want to sweat.  Talk about the commodification of yoga!  And misplaced priorities, too!
But this article made me realize how much I take the ease of dressing for yoga as a woman for granted.  Throw on a sports bra or a tank top and a pair of capris, and you're all set (although the market is certainly out there if you want to spend major money on frou-frou yoga duds).  But for men, it's not so easy; there's a fine line between comfort and self-consciousness, and the regular gym short might not suffice.  Finding that "just-right" clothing option matters so that a guy can focus on his trikonasana instead of worrying whether his pants will fall down when he stands up.
I'll quibble with the accompanying slideshow's offerings, which feature, among other treats, an $89.50 pair of Polo Ralph Lauren sweatpants and a $30 cotton tank top from American Apparel.  Really??  $89.50 for sweatpants?  Those kinds of prices just might make that Speedo seem like not such a scary option after all.
Yoga and the Missing Boutique (NYT)
Labels: bodies commodification consumerism fashion masculinity yoga