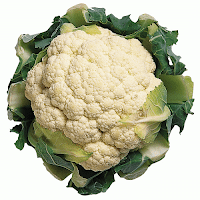 And now, a mid-winter ode to cauliflower.
In the ongoing quest that is my attempt to live well, cauliflower has secured a place near the top of my "most-beloved" list, right up there with spinach, cantaloupe and kombucha.  Not only is this fiber- and phytonutrient-rich vegetable easy to chop up and carry along for a day's rations, it's also surprisingly available at a time of year when most other fruits and vegetables are in short supply.
Without exception, when I eat a bowl of cauliflower florets, within 30 minutes my skin has taken on a certain rosy glow.  That might just be an individual reaction, but I recommend it for the skin health factor alone.  Beyond that, cauliflower's health benefits are similar to that of its better-known brother, broccoli.  Along with the folic acid and Vitamin C, its butter-nutty taste is especially delish.
Favorite snack of late?  Chopped up cauliflower dipped in marinara sauce.  It's raw, it's fresh, it's fairly easy to tote around, it's filling, it's flavorful (and, most importantly for anyone who tries to avoid wheat/gluten, it gives you the vague sense that you're eating pasta without the accompanying glycemic lows, lethargy, and brain-fog).  Even the most veggie-averse of my friends and co-workers don't mind it.  Give it a whirl.
The NYT featured a few quality cauliflower recipes last month that I've been meaning to highlight.  In particular, check out their Cauliflower Salad with Capers, Parsley and Vinegar (which is only lightly steamed, so still retains a fair amount of nutrients), and read up on the benefits of this in-season veg.  Finally, head over to WH Foods for the full lowdown.
Cauliflower Shines in Winter (NYT)
Cauliflower Salad with Capers, Parsley and Vinegar (NYT)
World's Healthiest Foods: Cauliflower
Labels: bodies health raw foods seasons