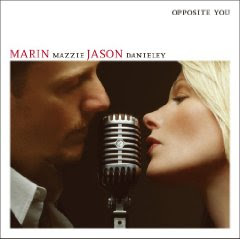 Julio and I christened the new year yesterday with a trip to the symphony.  And if the rest of 2009 lives up to its first day, this will be a delicious one indeed.
You can usually count on the SFS to trot out a few of the bigger Broadway names for a New Year's Eve Gala followed by a New Year's Day performance (think Audra McDonald, Brian Stokes Mitchell, etc.).  And this year they signed up the husband-wife dream team of Marin Mazzie and Jason Danieley.  These two are right up there with Taye Diggs and Idina Menzel scrapping it out as B'way's top power couple.  The program is usually pretty pop-lite, nothing super heavy, tons of recognizable cabaret tunes and symphonic pops to ring in the new year.  You've gotta feel for the performers, who after belting it out NYE have to get up and clear out the phlegm to do it again the next day.  Can't be easy; I imagine there's a fair amount of grumbling involved.
But you wouldn't have known it from the music showcased.  Within approximately the first 10 bars of the symphony's overture to Gershwin's Girl Crazy, I had tossed out all vague career girl aspirations in favor of knocking out that long-abandoned musical theater degree, marrying a baritone and popping out a passel of little Bernstein-wailing Von Trapp family singers (although supplanting the lederhosen with sequins and lame, methinks).  Swoon.  It was hard to sit still.
Mazzie and Danieley are such seasoned performers that it's easy to see them pop in and out of stage mode.  We had some sweet seats in the second row, center orchestra, which meant that we could see them off-stage as they prepared to come on, and to be honest, I much preferred those few little un-self-conscious glimpses to the well-oiled (but stellar, naturally) performers who cranked out Kander tune after Styne tune after Flaherty tune.  Two pro's in action, seriously.  (And did I mention that they're hot, too?  Mazzie's a curvaceous stunner with the most impossibly adorable ski-jump nose you've ever seen without gagging, and Danieley's unfortunate goatee was quickly atoned for by his loose curls and dreamy rendition of Younger Than Springtime).
Since Mazzie and Danieley are unfortunately already spoken for, while Julio was off securing cocktails at intermission, I swiftly applied some red lipstick and slipped my number to the timpanist, the principal cellist, and the entire section of string basses.  [The matronly, vaguely gestational vibe that emanates from women playing low strings somehow doesn't translate to the men in the same section; their awkward straddle still manages to come off as suavely masculine, more proof, once again, that Dudes Have It Better].  While I wait to hear from my future orchestral baby daddies, I'll crank up Mazzie and Danieley's CD, Opposite You, and imagine myself singing in the shower with that dreamy tenor filling in the harmonies.
Opposite You (Amazon.com)
Labels: dreamy future ex-husbands lederhosen music musicals theater