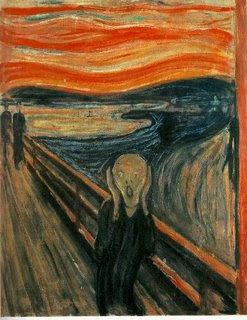 One of my less-official resolutions this year was to stay better in touch with my [badass rockstar] faraway friends and family.  What with all the gestating babies and job promotions and new houses and whatnot, there's so much to stay "up" on lately.  And the phone doesn't do it, and my snail mailing hasn't been up to par of late.
So in spite of a bazillion conflicted feelings and a fair amount of in-the-moment anxiety, earlier this month I finally broke down and created a Facebook account.  I've been in denial for the last several years, running from this amorphous beast that allows you and your best 1240 friends to track your every move via status update and photo tagging, freaked out by the spidery networks that come of this teenager-esque social networking site.  But it got to the point where I was so goddamned sick of hearing, "Oh, the pics are on Facebook!" or "Yeah, he told me on Facebook" or whatever, and sick of feeling like I was missing out on what had become a central aspect of getting on in the world (the same way cell phones went from frivolous to obligatory), that I sucked it up and did it.  (After circling my computer for a good few days and then running away quickly, that is.)
It's been a timid process thus far.  I've got every possible privacy block set to "on," and I've really only sought out my far-flung family members, the college gang and a few old high school music friends.  Not really many SF friends, elementary school acquaintances or any of that.  I generally hop on for five minutes or so max, avoiding the bizarro "25 Random blah blah" lists that make me feel like I'm about 13 and sitting in the back of algebra class passing notes with bratty adolescents.  But suddenly all these new social etiquette questions have come into play.  "De-friending" or whatever you want to call it, who to ignore and who to find, what will be the fatal error that starts a waterfall of obscure old grammar-school names from finding me.  Erghh.
Seems to me like just another portal ripe for bringing more drama into life.  And when drama is the thing I try to avoid, it's not really my thang.  On the other hand, it's been so genuinely lovely to reconnect with cousins from Boston and Serbia and Omaha and whatnot and feel connected long after our extended family gatherings have ceased to happen.  So what can you do??  Hold your breath and timidly log in now and then, I guess?  Until the snowballing happens and you're just another of the thirty-somethings spending hours a day tagging photos, I guess.  Shiver.
That said, here are two recent variations on this theme, worth your time (come on, you might as well spend the few minutes reading them that you'd otherwise use filling out some bullshit survey and tagging 73 of your nearest and dearest):
You Have No Friends (Everyone else is on Facebook.  Why aren't you?) (Slate)
* For obvious reasons, a useful read.  Article makes most of the points relevant to why I finally said, Oh, what the hell.
Friends, Until I Delete You (NYT)
* On the sociological phenomenon of Whopper Virgin un-friending.  And more.  Um, ok?
Labels: creepy obsolescence rockstar friends sigh solitude technology wtf