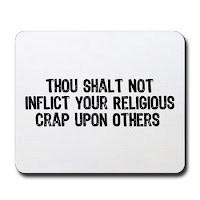 Don't know if you caught this profile in the NYT Magazine on Sunday, but you might as well take a few minutes to read it in case you're feeling in the mood for punching a wall.
This "New Calvinist" preacher dude out of Seattle, one Mark Driscoll, is apparently doing his best to take up the backwards Christian mantle from where the Promise Keepers left it in the late 1990's.  Erghh.  The article is so rife with theological landmines, I can't even get started - not to mention the huge can of worms that is the uber-confused attempt to redefine masculinity inherent in Driscoll's theological undertakings.
I'd parse the piece line by line if I could, were I not staring down a deadline right now and wishing more than anything else that I could go for a run in the sun instead of banging out boring shit about eschatology and postmodernity, but that's not gonna happen this morning, so please just read the article and take several deep breaths as you load each new page and try to make some sense out of the convoluted combination of reactionary hetero fear and pseudo-progressive theology going on here.  Sigh.  In some ways I feel like this dude's a step forward from the infuriating evangelicals of Joel Osteen and Co. (he talks about masturbation!), and in other ways, I think, oh sweet jesus, there are masses of people in Seattle LISTENING to this shit?  And acting on it?  With tattoos?
Read it and weep.
Who Would Jesus Smack Down? (NYT Mag)
Labels: bad religion christofascism frustration masculinity shoot me in the face sigh

Jess(ica) said…
I read this yesterday with no small amount of fascination at the overwhelming paradox this church represents. I should go ahead and state here for the record that I used to be a Calvinist (in college, long time ago, I've long since seen the light). As the article points out, Calvinism itself is one big paradox, but really what struck me as so odd is that Driscoll has combined an ancient hellfire-and-brimstone theology with a desperate attempt to accept mainstream culture. The two ideas could hardly seem less compataible. But brilliantly (though incorrectly), Driscoll uses Calvinism's predestination (I'm either damned or I'm not) to "justify" (in a way) talking about things the mainstream evangelicals find "un-Christian," like masturbation, etc.

I agree with you that the really sad part is that so many people have embraced this message. As a pluralist, I could really care less what people believe, unfortunately, these people like to tell me I'm going to hell, which I don't much appreciate.
January 13, 2009 at 11:05:00 AM PST