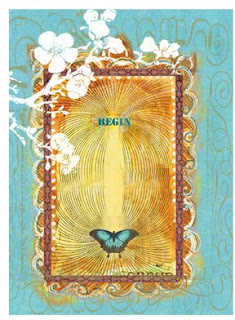 I've got resolutions on the brain.
It's that time of year, of course.  Being the recovering Type-A that I am, naturally I have approximately 27 of my own.  I usually end up with a long 6-hour plane ride at the end of December, a perfectly unplugged few hours of [hungover] quiet in which to knock out the annual list.
And this year was no exception.  Four days in, I'm cocky as hell about having rocked the major ones, which are, in no particular order:
1) practice yoga 2 hrs/day every day this year
2) knock out a book a week (so, 52 by the end of the year)
3) cut out caffeine after 4pm
4) think less, do more
You've gotta be specific, you know?  My favorite game of late has been to ask everyone I interact with if/what their resolutions are this year.  And I'll tell you, probably 80% of them tell me, in nicer words: fuck resolutions.  People don't give a shit.  They're sick of feeling guilty when they break them 2 weeks in.  They're the same resolutions every year (lose weight, stop smoking, cut out the crack habit, be nicer to grandma).
It's always been funny to watch the whole resolution thing unfold from behind my perch at the bar.  People come in - the same ones who usually swim in gin martini after gin martini, slinking home at the end of the night - and order iced teas.  They urge me to keep them accountable.  And then within the week's end they're back on the sauce.
It's too hard, too drastic.  You've gotta start small.  Big sweeping changes are destined to get you down.  But don't let their imposing nature keep you from scratching out a list yourselves.  There's something to taking a few minutes to resolve to live differently, even if it's in the minutest way.
Yoga Journal had an excellent newsletter last week focusing just on this often-misguided and demoralizing process of analyzing your life and making resolutions for the new year.  I thought about highlighting just one of the featured articles, but they were all so good, particularly as complements to one another, that I'll just give you the link here and tell you to read all three.  I like their emphasis on setting intentions vs. setting self-abusive prohibitions, as well as the way Phillip Moffitt draws on the circularity of the seasons in lifting up the naturality of life changes.  Read the article on the dharma of life changes and ask yourself what your dharma (your path, your way) might look like in the months to come.
And now I've got a yoga class to make.
Need a New Year's Resolution? (YJ)
Labels: buddhism cheesy shit meditation seasons yoga

Mariah said…
Mine for the year: do 99% of my grocery shopping at Trader Joe's, and rock climb once a month. Accomplished already for week one, we'll see where we get in the coming days...