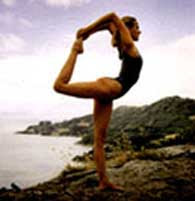 If you'll permit me an extra splash of self-indulgence in the cocktail of narcissism that is this blog, I'll share a little secret with you.  There are Big Things afoot on the resident yoga mat.  I feel a little like a kid on her first day of kindergarten: the backpack's been loaded for weeks, the new pencils sharpened in their case, the outfit laid out ahead of time, and the lunch already packed in the fridge.
This weekend I begin a 4-month certificate in Yoga Philosophy.  It's a pretty in-depth program, several days and nights a week, the long and short of which is that by the 1st of June I'll be a little bit of an expert (well, moreso than now) in classical yogic theory, Hinduism, the asanas, Buddhist psychology, Sanskrit, and meditation, among other things.  And I am so excited - like, tossing and turning in bed excited - about this.
I'd been planning for the last nine months or so to skip out to Mexico this spring and spend 10 weeks in Acapulco with Bikram and Rajashree training to be a certified Bikram teacher, a quiet little plan that had really driven my life in the last year or so.  But when I found out last fall about this first-ever offering of this special intensive, which is taught by some of the big names on the yoga scene, I knew there was no way I could pass this up.  So I've bumped my Bikram training plans back a few months to this fall, and will start up a few days from now studying under a few of my role models, the people whose names I've seen on bylines and book covers for the last several years and with whom I could only ever dream of studying in person. 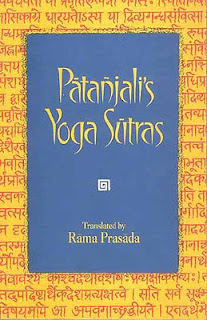 And now it's really happening!  I'm so excited.  Unabashedly excited.  For the content, yes, and the learning and the coursework and the lectures and the asanas and the seminars - everything from Tantra to the Upanishads to the Bhagavad Gita to Patanjali's sutras.  But I'm even more excited to spend these next 4 months in a cohort of like-minded yoga nerds, networking with people who live and breathe this shit the way I do, people who'd rather get up early and contort their bodies in weird positions in heated rooms than sleep in and watch baseball and drink beer at 11 am (though that has its place, too, don't get me wrong).
I got into yoga after years of resisting it, assuming it was too "soft," too wanky, too annoying.  Theater and dance friends swore by it, urged me to try it, pointed out how complementary it was to our performing interests, but I only ever dipped my toe into it, and then out of sheer aching desperation.  Two weeks after moving out here, frustrated from searching for work in a city I didn't know, I ran and ran and ran to clear my head between interviews, pounding the pavement until the SF hills made it too painful for my throbbing knees to take another step.  And so I slipped into a yoga class down the street, mostly out of the vanity of not wanting to lose my flexibility thanks to the tightening hamstrings and hips from all the running, and after that first 90 minutes of sweating and heaving and stretching and pulling, I never looked back.
And yoga has been there, my sanctuary and my exhilaration, for the 5 1/2 years since.  I leaned on it for release after soon getting the soul-sucking corporate job that kept me at a desk all day long.  I bobbled my way through evening classes, drunk on 3 gin and tonics after happy hour with the guys, trying desperately to focus my eyes on the swaying figure in the mirror.  I wandered numbly into the studio searching for clarity after the deaths of friends and family, sobbing through classes so grateful that the humidity made my tears blend in with the sweat dripping down my forehead.  I've booked flights around yoga class schedules, held off from trips because I didn't want to miss a seminar, skipped frou-frou dinner parties for the more real and delicious 2 hours of centering and fueling and feeding yoga practice.  And I've flopped around on sheets laid out on countless hotel room floors trying desperately to retain my regular practice across time zones and continents, cursing travel in a way I never thought my wandering heart would. 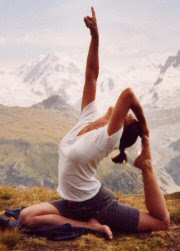 It's wild when you realize there's something that's so much a part of your life that you don't want to imagine living without it anymore.  I realized that last spring, and my "yoga year" to come, with this course now and teacher training this fall, is largely a byproduct of that.  The Buddhists call it "dharma," your path, your way, and I feel like, on the heels of grad work that focused on bodies and religion and society and desire but was yet so cerebral and removed from the actual experience of being in a body day in and day out, this is so obviously the right next step, my dharma, my way.
And it feels like the kind of thing I could do for the long-term.  My sibs and I had the good luck of being raised in the warm and boisterous community that was the campus ministry setting, all donuts and forts and good music and hippie college students looking out for us.  When I think about raising children in a yoga studio environment, I picture the same kind of loving mindful community, rich with connections and friendships and people who are striving in one way or another to live well.
But there's a measure of concern involved, as well.  I see friends turning 30, many of whom are so successful and have achieved so much of what they'd wanted to become, and yet so many of them seem miserable in their bodies, far away, detached, removed, unhappy, and it saddens me, and I see yoga and yogic theory as such a powerful potential antidote to that bodily alienation, and I want to give it to them. I've sat across cafe tables from friends watching their shoulders seethe with buried anger, and I have wanted to drag them head and tail into the nearest yoga class and undo all the tension and sorrow, and yet I know that people have to come to it themselves.  And I know how the yoga has changed my own life: my mind, my spirit, my body; it has given me so much that I am proud of, not just my still-flexible hamstrings, but my attitude toward diet (ahimsa, or non-suffering, being the motivation for vegetarianism), and a certain clarity of mind, and an ability to be still in difficult moments, and a penchant for sitting in lotus, and a certain sense of embodiment that I wish I could gift to the people in my life who seem outside of their own bodies, a sanctuary, a refuge, a home, a place wherein all outside stimulation stops and you are clear blue sky, tumbleweed emptiness, for 90 minutes at least, until you roll out of shavasthana and wipe your forehead and collect your things and mosey on out the door.
Because I think it is that elusive combination of holistic mind-body-spirit religious sentiment that so much of the world is seeking right now, and not finding, in so many other places.  So that's why I'm doing this course now, and the more physiological training this fall, and I guess the point of saying all that is to warn you that you shouldn't be surprised if suddenly Raw Rach seems to have been hijacked by wanky yoga theory shit, because that's going to be front and center for the next several months.  And to encourage you to think about your own dharma, your own path, your own way, that which keeps you up at night with the kind of excitement you know will pull you from your bed in the wee hours to make notes and write and think and dream and do.
Did I mention the part about the nice ass?
Labels: bodies buddhism existential rambling higher education i left my heart meditation philosophy religion splits stream of consciousness wankiness yoga