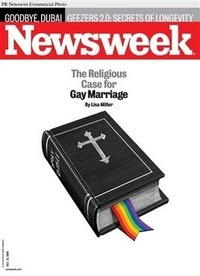 Dishy stuff from the folks over at Newsweek, and just in time for the holidays.  You can bet your britches that the "Christian" conservatives have got their panties in a bunch.
We can usually count on these mainstream mags like Time and Newsweek putting out a satisfactorily-bland religiously-themed issue around the holidays.  Slap a pretty picture of the Virgin Mary on the cover, write some inoffensive crap about how Jesus was maybe really born in the summertime, the issue sells reliably, and the writers get some time off for the holidays.  This year, not so much.
You've gotta give Newsweek serious credit for having the balls to publish this piece, and on the cover, no less, knowing it'd be popping up on subscribers' coffee tables across the country.  Lisa Miller's straightforward piece (no pun intended) arguing that the Bible in fact supports gay marriage is about as rational and non-inflammatory as you can get when discussing this topic; she so ably discredits claims at biblical literalism and moves right on to the real heart of the issue that you hardly even realize she's written off the vast majority of Prop 8 supporters whose faith is misguidedly and blindly rooted in a backwards belief in biblical literalism.
Of course this has set off a media firestorm.  And you've gotta know that Newsweek anticipated that, too.  What I love is that Miller makes the same arguments here in this mainstream rag - the same one that millions of people will walk by and ruffle through while they wait in line at the grocery store and the gas station - that tons of progressive theologians have been making for years, while those supposedly inflammatory arguments sit collecting dust on bookshelves in obscure libraries and bookstores where the only people who actually read them are dorks like me and people who already believe biblical literalism is bunk.  So here's Miller putting it in easy-to-read layperson's terms on the cover of a mainstream national magazine.  Killer pulpit.  I love it.  Bring it.  Any way you can.  Period.
Read the article.  I appreciate its ultimate emphasis on inclusion - "The practice of inclusion, even in defiance of social convention, the reaching out to outcasts, the emphasis on togetherness and community over and against chaos, depravity, indifference—all these biblical values argue for gay marriage," - which of course strikes at the heart of the hateful exclusionary motives behind conservatives' fight against gay marriage.  Miller does well to point out the parallels between this current issue and the civil rights and race-based exclusionary arguments of the past.
People want to love each other, in the context of a societally-approved institution.  That's it.  Really not so difficult to understand, or affirm.  I'll be interested to watch the firestorm continue to develop.  This issue is not going away anytime soon.  (And thanks to MLS for sending.)
Our Mutual Joy (Newsweek)
A Religious Reaction to Gay Marriage (Newsweek blog collection of responses from The Crazies)
Labels: bad religion christofascism marriage national paranoia politics sexuality

Jess(ica) said…
Thanks for posting this. I look forward to reading it. Admittedly, it will only confirm my existent beliefs, but its always nice to be reminded. Quite a bold move from Newsweek.

Did you happen to see Huckabee on The Daily Show last night? He and John discussed gay marriage. It was an interesting exchange. John bested him, IMHO.
December 10, 2008 at 11:23:00 AM PST