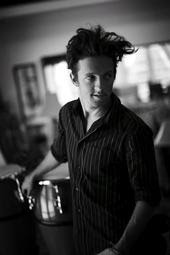 Sat tucked up in the trees at the Greek Theatre in Berkeley last night watching the fog roll in over the crowd listening to One Jason Mraz bring it.  What a show.
Dude has got some pipes.  Along with one of the hotter senses of rhythm I've witnessed in some time.  Notwithstanding the hundreds of other folks feeling the same way, it was one of the better dates I've had in awhile.  Whew.  This raw-vegetable-eating peace-loving green-living yoga-practicing guitar-playing hat-wearing Obama-voting Prop-8-fighting troubadour puts on a good show, especially when you're sitting in a grove of thick trees and the air's cool and everyone's jamming.
I don't usually go for tenors, but this one can wail.  Mraz mostly covered the big 'uns from his latest album, but there in the twilight and the mist and the silence of the sky overhead, the simplicity of the melodies and the richness of his voice were amplified.
Catch a show if it stumbles into your neck of the woods.  You won't be disappointed.
Jason Mraz Tour Dates
Labels: dreamy future ex-husbands hot boys with big hair music nature