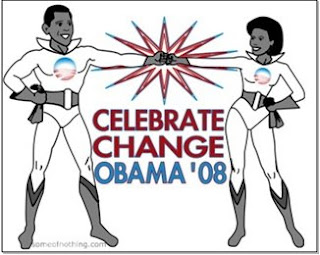 As we try to restructure our mental lives sans election drama, post-mortems keep popping up here and there in the media.  I'm not so much one for contrived "grand narratives" attempting to explain huge social shifts evidenced by the events of the last few years, but I found this piece from New York Magazine to be a fairly concise but on-point round-up of the gender politics involved in the Hillary-Sarah phenomena of the '08 election.
The article is called "The 'Bitch' and the 'Ditz'," which pretty much sums up its key points.  Read it for a decent collection of conventional wisdom in the fallout from 18 million cracks being made in the glass ceiling.
I still don't believe Hillary was ever electable, but I'm intrigued by these latest buzzings about her being offered the Secretary of State position.  We'll see what happens after Obama's people finish vetting Bill, but in the meantime, it seems like a decent opportunity for this elder stateswoman to make her own way.
The 'Bitch' and the 'Ditz' (NY Mag)
Labels: gender politics politics