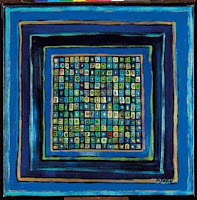 Top 15 Most Satisfying Things on a Morning in Early November:
15. Waking up in a fabulous hotel with fast wireless and delicious sheets
14. The fresh pot of coffee brewing around the corner in said hotel
13. Sitting in bed in lotus watching the news trying to pretend the economy isn't crashing and burning.  Abovementioned coffee playing a large role in this attempt.
12. No longer being stuck on my uncomfortable ass in a plane that was delayed 7 hours and made me miss my bonding time with the cutest baby born in the last 5 weeks.  (US Airways, it's over)
11. Knowing you're going to see her in a few hours
10. Knowing you're going to see the rest of your old ones at the end of the afternoon for a party involving cocktails and dancing and big white dresses.  And lots of hugs.
9. Driving through the main street of your old college town at midnight and seeing stumbling 20-year-olds on the sidewalks and knowing you're a grown-up and they're not you and god, was it really that long ago?
8. Free morning newspapers
7. Not being on a plane anymore.  Not being on a plane anymore next to a whining middle-aged mom.  Not being on plane anymore next to a whining middle-aged mom from Jersey.
6. Cranking up the thermostat and doing your own homegrown Bikram yoga on the blue- and yellow-checked carpet.
5. Sitting in Joe Biden's home state and feeling the VP buzz
4. Knowing you get to go home to SF again
3. WaWa glistening down the street (I CAN'T WAIT PEOPLE)
2. The fact that it's about as warm here this morning in the Mid-Atlantic as it is in San Francisco
1. Obama afterglow.  'Nuff said.
I've been tempted to say something about the election and the widespread euphoria of the past few days (barring the unfortunate passing of Prop 8, something many of us just didn't foresee happening).  But the pundits and the journalists and the political scientists are all over it.  There's not much I can add.  Except for: relief.  Release.  Rejuvenation.  Rebirth.  Renewal.
Sweet jesus.  Change.
Labels: babies blue hens coffee politics stream of consciousness wawa