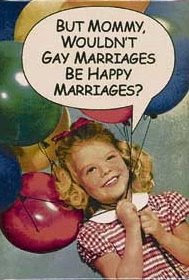 Not only is this election huge in terms of the Presidential race, but for California voters, it's important for another reason; there's a proposition being weighed here that would deny the right to marriage between anyone other than a man and a woman.  Basically, Prop 8 would amend the state constitution to deny civil rights, institutionalizing discrimination.  Pretty messed up.
I may feel ambivalent about some of the more institutionalized aspects of marriage-as-social-contract, but I certainly believe anyone and everyone should be allowed to jump into the wedding planning biz if they want to.  I mean, who's to deny anyone else from registering for some sweet-ass china at Williams Sonoma??  Not to mention the right to sit at a dying beloved's bedside.  Especially on the basis of some homophobic religious right propaganda.
The No on Prop 8 team, backed vocally by Gavin Newsom, has some stellar ads out to counter the vote.  Several of them are genuinely funny plays on the familiar Mac vs. PC commercials.  I'm including one below.  I know many of you aren't CA voters, but if you are, be sure to spread the word to vote no against Prop 8.  So not cool.

Anonymous said…
That is awesome! It just makes sense, but people hide behind what doesn't then get mad when you ask "why'? Hopefully, reason prevails and California will not eliminate rights that just have to be restored again one day.
November 4, 2008 at 12:45:00 PM PST